Witnessing an Overdose: Your Next Steps

Overdose was responsible for the deaths of 67,367 people in 2018. It’s likely that you know someone who has experienced an overdose, or you may witness one yourself. Dealing with an overdose can be a harrowing experience, but if you do, it’s important to be prepared. What does an overdose look like, and what should you do if you witness one?

There are things you can do to prepare yourself if you witness an overdose. However, please note that the following is not medical advice. If you’re not a doctor, you should always consult medical professionals if someone’s health is in danger.

Identifying an overdose may be crucial to getting someone the help they need, but it’s not always easy to spot. An overdose isn’t always dramatic, like when someone is poisoned in a movie. It can look like someone falling asleep or quietly losing consciousness. In any circumstance when someone’s life may be in jeopardy, it’s best to call for a medical professional if there is any doubt.

Drug overdose symptoms will depend on the drug that’s being used. In many overdose cases, more than one drug is used at the same time. Here are some of the most common drugs that can cause potentially dangerous overdoses and the symptoms they may present:

Central nervous system depressants are drugs that slow down the functioning of the nervous system to cause a physical and psychological relaxing feeling or to facilitate sleep. Alcohol and prescriptions like benzodiazepines are in this category.

Depressants taken in high doses will slow down the nervous system to the point that it starts to shut down vital functions. It can also cause gastrointestinal distress, dehydration, and psychological effects. Nausea and vomiting are common with alcohol. Vomiting and frequent urination can lead to dehydration, which may present with dizziness, clammy skin, and a flushed complexion.

Depressants can cause memory impairment, loss of coordination, and cognitive impairment. An overdose may include these side effects, and a person may have trouble sitting up, communicating, or following a line of thinking. Depressants may also cause someone to lose consciousness or struggle to maintain consciousness. They may also be unresponsive to someone trying to wake them up. Uncontrollable rapid eye movements are also common.

Potentially dangerous symptoms may include seizures, slow or irregular breathing, and hypothermia. If someone is breathing very slowly and their body temperature is very low, they will need medical attention as soon as possible.

Central nervous system stimulants are drugs that increase activity in the nervous system and excite a user physically and mentally. Stimulant drugs include prescriptions like amphetamine and illicit drugs like methamphetamine and cocaine. Stimulants are misused for their ability to induce feelings of powerful euphoria and extreme confidence. Stimulants can also cause increased wakefulness, racing thoughts, increased body temperature, and heart palpitations. Side effects of potent stimulants like cocaine include sweating, anxiety, tremors, hallucinations, and chest pains.

During an overdose, strong impacts can cause extreme side effects such as panic attacks, seizures, confusion, dangerous cardiac symptoms, and a condition called stimulant psychosis. This psychosis is marked by a disconnection with reality that may include visual or auditory hallucinations or delusions.

Stimulant overdose can become dangerous when heart palpitations lead to heart failure, stroke, or heart attacks. Increased sweating and vomiting may also lead to dehydration that can add to dangerous side effects.

Psychological symptoms can also be potentially life-threatening. Paranoia, hallucinations, and reckless behavior can lead to accidents and injuries. Stimulants can cause more pronounced overdose symptoms like tremors, seizures, or chest pains. If someone passes out suddenly, or if they start to shake or complain of chest pains, call for emergency service immediately.

Opioids can cause similar symptoms to depressants during withdrawal. Opioids can cause loss of consciousness, lowered awareness of surroundings, slowed breathing, and confusion. Dangerous overdose symptoms usually involve slowed or stopped breathing, leading to oxygen deprivation. The prevalence of opioid use issues has led to an epidemic of opioid overdose deaths with 46,802 opioid overdose deaths occurring in 2018. The prevalence of opioids has also increased polydrug use.

Polydrug use may involve mixing drugs with similar or opposing effects. Unfortunately, polydrug use is very common among dangerous overdoses. Mixing depressants and opioids can potentiate negative side effects, leading to an overdose with lower doses of each individual drug. If you start to see overdose signs but you know the person hasn’t taken a dose that would normally be too high for them, don’t write it off. They may have another drug in their system.

Stimulants and opioids can mask each other’s effects, making it harder to tell if someone has overdosed.

What Can You Do?

Again, if you notice signs of a dangerous overdose, the best thing to do is to go straight to the emergency room or call for emergency services, whichever is faster. Depending on the drug and the severity of a person’s condition, they may only have minutes to receive medical attention before death or lasting medical issues. In some cases, overdoses that cause cardiac issues or respiratory depression can lead to permanently damaged brain tissue or organs.

But if you call 911, what can you do in the moments between your call and the arrival of emergency medical services? Again, it depends on the drug. Alcohol and depressant overdoses can cause a loss of consciousness and vomiting. If someone is passed out and throwing up, they may choke or aspirate vomit, which can be deadly. It may help to help them to gently roll over onto their side with what’s called the Bacchus Maneuver.

This position allows you to put their hands under their chin to keep it off the floor and prevents them from rolling onto their backs, which can cause asphyxiation. After you call 911, stay with the person until emergency services arrive. Prevent them from changing into a dangerous position. Opioids may cause similar symptoms like vomiting and loss of consciousness and may call for the same maneuver. 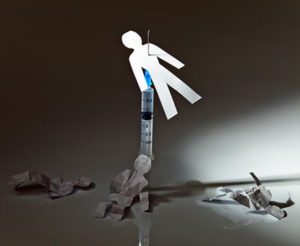 Opioid overdose can be reversed with a drug called naloxone, which is sold under the brand name Narcan. It varies from state to state, but in many places, this drug can be bought over the counter at a pharmacy. EMT and paramedics are likely to carry the drug. In some counties, police officers also carry the drug.

If you administer naloxone to someone during an overdose, be aware that it may send them into sudden opioid withdrawal symptoms. While it’s unlikely that these symptoms will be life-threatening, it can cause unpleasant flu-like symptoms, including vomiting.

Other Tips For Dealing with an Overdose

Remain calm and give firm directions. Someone who’s experiencing an overdose may be in a vulnerable emotional state and may have trouble following complex directions. Yelling, anger, and panic may feed their own anxiety or irritability, which may make them less compliant with your help. Speak to them clearly and patiently and let them know you’re trying to help.

Keep them comfortable and calm while emergency services are on their way. If they complain of being too hot or cold, give them a blanket or move them to the shade. Indoor, climate-controlled environments may be best. Quiet places may help ease emotional distress and prevent them from trying to leave before help arrives. Don’t attempt to put them in cold or hot showers to regulate body temperature because doing so could lead to shock. This may be more difficult with someone that’s taken a stimulant, but keeping them calm and in place can prevent injury.

Don’t give them food, drink, or medicine except for water. Moderate water intake. A dehydrated person should drink a bottle of water while emergency services arrive, but excessive water intake without purging in a short period of time points to medical problems. Though it may seem logical to induce vomiting to avoid further intoxication, it may do more harm than good if it causes choking.