Is Alcohol Really Addictive? (What the Science Says in 2019)

Alcohol is an addictive substance, but the risk each person has for developing an addiction to alcohol depends on a variety of individual factors. While alcohol use is widespread in the United States, not everyone who drinks will develop a dependency on the substance.

Alcohol use disorder (AUD) is the medical term for problem drinking that has become severe and compulsive. According to the National Institute on Alcohol Abuse and Alcoholism, AUD is a chronic brain disease signified by relapse.

Alcohol has different effects on different people, and these risk factors impact who is more susceptible to having problems with alcohol.

The risk factors for alcohol dependence include:

How Does Alcohol Addiction Actually Happen?

NIAAA states that drinking small amounts of alcohol is safe, but as a person progressively consumes more alcohol and begins to misuse it, there can be changes in the structure and functioning of the brain that leads to AUD.

As these changes in the brain occur, occasional moderate use of alcohol can turn into a chronic, compulsive drinking habit where the person often feels unable to control their drinking.

NIAAA has identified three stages in the cycle of alcohol addiction.

The neural patterns that develop in the brain during active alcohol addiction can remain even after a person stops binge drinking. The brain can ingrain habits and patterns that are difficult to break, which is why alcohol abuse can be a chronic problem with a high potential for relapse.

The precise amount of time and level of alcohol consumption it takes to develop AUD is not specific. In general, the longer a person drinks at higher levels of consumption, the more likely they will be to develop an addiction.

Prevalence of Alcohol Use Disorder 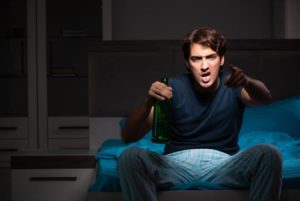 How Does Alcohol Compare to Other Drugs in Terms of Addiction?

Alcohol is one of many addictive substances that trigger the pleasure and reward circuitry systems in the brain, creating behavioral reinforcement that drives compulsive drug-seeking behaviors. Alcohol, however, is a legal recreational substance with wide social availability and approval.

The American Society of Addiction Medicine reports that in 2016, an estimated 2 million people had substance use disorders (SUD) involving prescription painkillers, and 591,000 had an addiction that involved heroin.

These numbers indicate that alcohol use disorders are far more common than disorders of other drugs of abuse. Other substances can be more dangerous in terms of their overdose potential, however.

ASAM further states that opioid addiction is a lead cause of the overdose wave in this country. There were 20,101 deaths from prescription painkiller overdose and 12,990 heroin overdose deaths in 2015.

How Is Alcohol Use Disorder Treated?

AUD is often treated with addiction counseling, sobriety support groups, and behavioral accountability modifications. There are also some options available for medication-assisted treatment (MAT) for alcoholism.

The Substance Abuse and Mental Health Administration outlines the following MAT options for alcohol use disorder:

Alcohol has historically been seen as a problem of willpower and a failure of moral character, but research and science have demonstrated that there are powerful systems that are triggered in the brain when alcohol or other addictive substances are consumed.

While excessive alcohol consumption causes real biological changes that promote and facilitate the cycle of addiction, there are also potential medical treatments that can help people struggling with alcohol use disorder.

While many people experience relapses during their recovery journey, there is help available for people who are ready for treatment and want to take control over their alcohol use finally. Finding the right treatment providers is the first step toward loosening the grip of alcohol addiction in your life.