Is Marijuana Addictive to Its Users? (What the Science Indicates)

According to the National Library of Medicine (NLM), prolonged marijuana use can result in an addiction.

Those who start using the drug as an adolescent, before brain development has fully concluded, are more likely to become addicted. The same is true for people who use the substance every day.

Marijuana is a natural plant substance that is usually dried and smoked. It may also be cooked or baked into food products to be eaten or processed into an oil and used for vaporizing.

It is used medicinally in some circumstances, but it is widely regarded as a recreational drug that remains illegal in many states.

Addiction is characterized by the presence of compulsive, repetitive drug-seeking behaviors despite negative consequences and physical or psychological dependency on the substance, according to the National Institute on Drug Abuse (NIDA).

Dependency on marijuana can be identified by the presence of withdrawal symptoms when the drug is unavailable. There is some interchangeable use in the scientific literature of dependency and addiction even though a person can have a dependency on a substance without the accompanying drug-seeking behaviors.

The symptoms of marijuana withdrawal that accompany dependency are relatively mild compared to the severity of symptoms associated with other addictive substances. They are more likely to occur in heavy marijuana users and those who consume the substance every day.

Withdrawal Symptoms From Marijuana Include The Following:

The presence of these symptoms when marijuana use has stopped can indicate that a dependency has developed in the body. This means the body has become acclimated to having marijuana present, and the brain is signaling to ingest more of the drug to get relief from these symptoms.

These symptoms could last anywhere from a day to a few weeks, depending on how long a person has been using marijuana and how much of the drug they have been consuming.

How Does Marijuana Work? 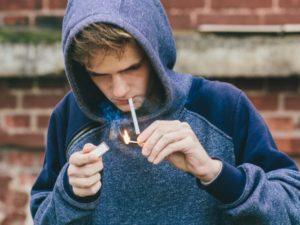 Marijuana contains the psychoactive property delta-9-tetrahydrcannbinol (THC), which interacts in the body to stimulate the reward system in the brain that reinforces drug consumption, according to NIDA.

The brain recognizes and responds to THC because it is similar in chemical structure to the natural brain chemical anandamide. This similarity in structure allows the brain to recognize THC and use it to alter communication between brain cells. These chemical messages influence the brain’s response to pleasure, memory, sensory perception, concentration, and coordination.

THC interacts with the cannabinoid receptors in the brain. It can relieve pain and produce a feeling of relaxation or a euphoric high. The effects last for a couple of hours.

Marijuana also interacts with the GABA nerve terminals to produce an increase in the neurotransmitter dopamine in the brain.

This stimulation of the brain and the subsequent flood of dopamine into the brain is characteristic of how other addictive substances work. It increases the pleasure chemicals in the brain while simultaneously triggering a reinforcement response that the brain sends out to give users the message that they should consume more of that substance.

Some users do not experience pleasant effects. Instead, they experience anxiety, paranoia, or panic.

This could happen if a person is not accustomed to taking marijuana, takes too much of the drug, or uses a sample with high potency. This can even cause episodes of substance-induced psychosis in some users during which hallucinations or delusions can occur.

Different Methods of Use

When marijuana is inhaled, the active substance (THC) moves rapidly into the lungs and then through the bloodstream. The substance is carried to the brain and other areas of the body. Then, it is rapidly absorbed.

When marijuana is smoked, the effects of the drug begin to take hold within a couple of minutes. They can last for hours, depending on the person’s tolerance to the drug.

Marijuana is absorbed more slowly when it is eaten in food. When consumed this way, it goes through the gastrointestinal system before entering the bloodstream. With this manner of ingestion, it takes 30 minutes to an hour before the first effects are experienced.

Effects on the Brain

Marijuana alters the function of several other areas of the brain, including the:

Over time, people can experience a decline in their cognitive abilities and motor skills when marijuana is regularly used. With abstinence, some of these functions return to normal levels, but with prolonged use, the damage may be permanent.

Marijuana may be more addictive when mixed with other substances.

It is often combined with alcohol or other drugs, such as cocaine or stimulants. Mixing marijuana with other drugs increases the likelihood of adverse outcomes, including addiction.

How Many Marijuana Users Become Addicted?

According to the National Institute on Drug Abuse, marijuana is the most commonly used illicit substance in the United States. Their research states that over 11 million adults, ages 18 to 25, used marijuana in 2015.

One study from the journal Neuropsychopharmacology notes that current data shows that 30 percent of cannabis users meet the DSM criteria for cannabis use disorder (CUD). However, the presence of cannabis use disorder does not necessarily mean that people are engaging in the compulsive drug-seeking behaviors associated with addiction, which is a distinction that some studies do not fully make.

Even with the growing social acceptability of marijuana and public perception of its relative safety compared to other drugs, NIDA states that in 2015, four million people met the criteria for marijuana addiction, and 138,000 sought treatment for marijuana abuse.

NIDA reports that the levels of THC in current marijuana supplies have been steadily rising over the past few decades. These higher THC levels could contribute to rising marijuana use disorders, as higher potency increases its addictive potential

THC content in confiscated marijuana samples was about 3.8 percent on average in the early 1990s. By 2014, THC content was averaging closer to 12.2 percent. Marijuana extracts that are used as oils for vaporizing can contain 50 to 80 percent THC.

This has some addiction professionals concerned for the future. These higher potency levels could increase the potential for an increase in marijuana addictions, as the drug becomes more socially acceptable and available as a recreational drug in many states.

Classification and Medical Use

The U.S. Drug Enforcement Administration (DEA) classified marijuana as a Schedule I drug in 1970, which means that it is in a category characterized by a high potential for abuse and no acceptable medical application. This puts marijuana in the same class as heroin, LSD, peyote, methaqualone, and ecstasy.

This classification contradicts information from other sources about the medicinal uses of marijuana that has precipitated the medical marijuana industry’s presence in several states.

According to NLM, marijuana contains two main cannabinoids: THC and CBD. These chemicals have been isolated for use in some medicines to treat nausea and increase appetite in cancer and AIDS patients. CBD has also been used to treat childhood epilepsy.

Some people are turning to marijuana as a substitute for opioid painkillers because of opioids’ highly addictive properties and the associated dangers of overdose. A report published in the  Journal of Psychoactive Drugs indicates that researchers are beginning to look at the potential risks and benefits of medical marijuana as a way to reduce tolerance to and withdrawal from opioids in patients with chronic pain conditions.

Is Marijuana More or Less Addictive Than Other Drugs?

An individual’s risk for developing an addiction to marijuana is influenced by many factors, such as personal or family history of substance abuse, adverse childhood traumas, social and environmental factors, and the acceptability of marijuana use in their social groups.

While marijuana may not cause the same level of physical dependence as opioids or meth, it can lead to abuse and psychological dependence. People should carefully consider their risk factors before turning to marijuana for treatment of medical conditions or recreational use.