Drug Rehab Options for the Poor and Homeless

No sector of society is spared when it comes to substance abuse. It is particularly unsparing to our most vulnerable citizens, the elderly, the sick, the homeless, and the poor. In fact, addiction has wrought a special kind of havoc on the poor and homeless, inflicting sickness, disease, and death.

In a study centered on the Boston-area homeless population, drug overdose caused one in three deaths among those under the age of 45 from 2003 to 2008 — a death rate that was 16 to 24 times higher than that of the general population of Massachusetts. Homeless individuals also have inordinately high rates of illnesses associated with alcohol and drug use like liver disease and seizure disorders.

There is also a correlation between drug use and lower-income individuals. While substance abuse often leads to poverty, people making less money are more prone to certain addictions. For example, heroin addiction is more than three times as common in people making less than $20,000 a year compared to those who make $50,000 or more, according to the U.S. Centers for Disease Control and Prevention (CDC).

It is also no secret that people with more financial means have access to superior drug and alcohol treatment, affording them a greater opportunity at recovery.

The homeless and the poor do not have that luxury, which is why drug rehabilitation access is essential. Luckily, there are programs available for people in these groups that can provide them the help they need to get well. 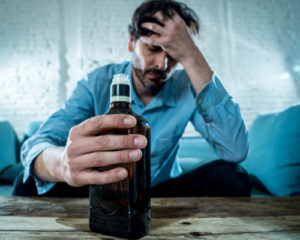 And someone who is already classified as unsheltered can succumb to substance abuse. In fact, the unique pressures associated with homelessness can make one more prone to abuse substances.

Commonly Abused Substances by the Poor and Homeless

What Follows Is the Most Commonly Abused Substances Among the Homeless:

The opioid drug crisis, widely considered the worst drug epidemic in U.S. history, has all but overshadowed most other substances of abuse. In the midst of this epidemic, there appears to be a resurgence in the use of stimulants like methamphetamine.

Just like in other sectors of society, marijuana is also prevalent among the homeless. One study on homeless young adults, defined as individuals ages 12 to 24, concluded that marijuana was their drug of choice.

Cheap and widely available substances like alcohol and synthetic marijuana are also common substances of abuse among the homeless.

This appeared to be the case in New York in 2018 when a toxic batch of K2 contributed to multiple overdoses. Most of the victims were said to be older men living in homeless shelters battling drug addiction. A New York Times report stated that three homeless shelters were among the five places identified as epicenters of those overdoses with the largest number of patients coming from a particular shelter.

Finally, opioid use appears to also be prevalent among the homeless as well, like in much of the country. Opioids were responsible for more than 80 percent of overdose deaths among homeless adults in the Boston area, according to one local study.

Options To Address Homelessness and Addiction

The biggest barrier to treatment for homeless and poor individuals is access. However, there are options available for people struggling with addiction who fit into these categories.

Depending on the state, Medicaid can provide coverage to treat clients with substance abuse disorders (SUDs). The expansion of Medicaid under the Affordable Care Act (ACA) has allowed states to cover a bigger scope of substance abuse services. For more information about Medicaid in your state, please visit this link.

The Salvation Army offers no-fee rehabilitation facilities that offer long-term residential recovery programs for people who have substance abuse issues and other addictions. In addition to offering housing, food, counseling, community, and employment, the venerable institution provides treatment for drug and alcohol abuse and the root causes of those issues.

Projects for Assistance in Transition from Homelessness (PATH) is a federal block grant administered to all 50 states and U.S. territories to help homeless people access treatment for mental health and substance use problems. This program, which is helmed by the Substance Abuse and Mental Health Services Administration (SAMHSA), is intended to address mental illness. PATH provides funding for the following services:

To learn more about PATH providers in your state, feel free to visit this link.

SAMHSA’s Cooperative Agreement to Benefit Homeless Individuals (CABHI) helps clients with behavioral health problems find housing. CABHI is a competitive grant that is awarded to nonprofit organizations, governmental entities, and schools that submit a proposal to receive the money. It is funded by the Center for Mental Health Services and the Center for Substance Abuse Treatment and provides assistance for substance use disorders, serious mental illness, serious emotional disturbance, and co-occurring substance use and mental health disorders.

SSI/SSID Outreach, Access, and Recovery (SOAR) is another SAMHSA program that helps people who are homeless or at risk for being homelessness gain access to Social Security disability benefits.

There is a significant portion of homeless people who are veterans. Many of them are Vietnam War vets. An estimated 11 percent of the homeless population are veterans, according to the National Coalition for Homeless Veterans. SAMHSA and the U.S. Department of Veterans Affairs offer resources to assist veterans who are struggling with mental health issues, substance use disorders, and homelessness. The VA has outreach programs that seek out veterans in need. The VA strives to help veterans find housing solutions, health care, and employment opportunities.