What Is Drug-Induced Serotonin Syndrome?

The role serotonin plays in the body is an important one. The chemical carries messages between nerve cells in the brain and throughout the body, but it also plays a role in bodily functions, such as digestion, mood, sleep, wound healing, nausea, blood clotting, bone health, and sexual desire.

While most of us will never have to worry about too much or too little serotonin, some people are born with chemical imbalances, causing them to take medication to manage the deficit. Serotonin levels that are too low or too high can lead to physical and psychological health problems.

Research has found that 95 percent of the serotonin in your body is produced in the gastrointestinal (GI) tract’s lining. The remaining 5 percent is made in the brain, where it acts as a neurotransmitter that carries signals between neurons. Serotonin levels in the body significantly impact mood and behavior.

The chemical is linked to living longer and feeling good. Those with lower serotonin levels may be inclined to use supplements, antidepressants, or other natural approaches to increase their levels. In some cases, people might abuse drugs that interfere with serotonin levels and cause drug-induced serotonin syndrome.

Below, we’ll learn more about serotonin, its role in the body, and what happens when drugs that stimulate the neurotransmitter cause serotonin syndrome.

Serotonin, also known as 5-hydroxytryptamine (5-HT), is a monoamine neurotransmitter that sometimes acts as a hormone. It’s responsible for carrying messages between nerve cells in your brain, central nervous system, and throughout the peripheral nervous system. The chemical messages provide your body with messages on how to work. The neurotransmitter plays various roles in your body, such as influencing sleep, learning, happiness, memory, regulating body temperature, sexual behavior, and hunger. If you don’t have enough of it, you might experience anxiety, depression, mania, or other health conditions.

Serotonin plays a role in the following functions:

What Is Serotonin Syndrome? 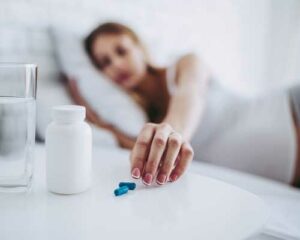 onin plays a vital role in how the body functions, too much of it can also be dangerous. Serotonin syndrome occurs when you have too much serotonin, which is typically caused by using drugs or prescription medications affecting serotonin levels. If you experience issues similar to serotonin syndrome, the action is to stop using the drug or medication causing it.

Serotonin syndrome is a potentially life-threatening drug reaction caused by too much serotonin in your body. Most people have no issues taking serotonin-affecting medication when a doctor prescribes a safe dosage. However, serotonin syndrome results from taking a new drug or increasing the dose of a medicine that increases serotonin levels. If your body processes the neurotransmitter differently or it cannot process an increased amount of it, serotonin syndrome can occur.

Serotonin syndrome symptoms range from mild to fatal, producing diarrhea, or nausea, to high fever or seizures. If it’s not treated quickly, it will be deadly. Healthcare providers first noticed the condition in the 1960s after the approval of the first antidepressant medications. In today’s market, more serotonin-affecting drugs are available, which has led to a growing number of serotonin syndrome cases.

Anyone who uses specific prescription medications, illegal drugs affecting serotonin levels, over-the-counter medications, or herbal and dietary supplements is at risk of developing the condition. Below, we’ll discuss the most common symptoms of serotonin syndrome.

What Are the Common Serotonin Syndrome Symptoms?

As mentioned above, serotonin syndrome symptoms range from one person to another. If you’re using medication that affects your serotonin levels and experience any of the signs we list below, you must contact your doctor or rush to the emergency room immediately.

If you have mild serotonin syndrome, you can experience:

If you have moderate serotonin syndrome, you can experience:

If you have severe serotonin syndrome, you can experience

If you’ve been taking high doses of medication or illicit drugs and are concerned about serotonin syndrome, you can expect symptoms to develop within a few hours. Nearly everyone will experience symptoms within 24 hours of beginning or increasing the dosage of a serotonergic medication.

Serotonin syndrome is caused by:

What Drugs Cause Serotonin Syndrome?

If you’re concerned about serotonin syndrome, knowing which drugs can cause it is important. Anything from prescription antidepressants to MDMA (ecstasy, Molly) can cause the phenomenon. You must always be careful with what you put in your body.

Even herbal and dietary supplements can affect our serotonin levels, including St. John’s wort, ginseng, Syrian rue, nutmeg, and tryptophan. Individuals who abuse illegal substances like ecstasy, cocaine, LSD, amphetamines, and methamphetamines are at extreme risk of developing the condition. When using stimulant drugs, individuals tend to binge, meaning the chances of developing serotonin syndrome are elevated.

If you’re concerned about serotonin syndrome, you must speak to your doctor. If you’ve developed an addiction to the aforementioned drugs and can’t stop, get help now. It may not be as easy as just stopping if you’ve become addicted, so seeking professional addiction treatment might be your final option.

Fortunately, many options exist. If you’re concerned about serotonin syndrome, get the help you need today before it’s too late. Serotonin syndrome can be fatal, so reach out today.