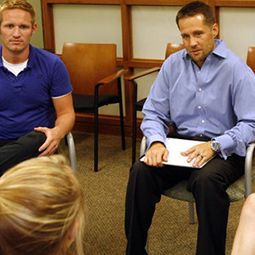 The Times of Trenton

WEST WINDSOR — There’s a new small business in town trying to solve a big problem: how to help the growing number of people battling addiction in a world that is often fearful of—even hostile to—such efforts.

Summit Behavioral Health recently opened an outpatient center on Quaker Bridge Road. It has intensive outpatient programs, uniquely designed recovery plans for each patient, and space for groups like Alcoholics Anonymous to meet.

Over time, the business hopes to expand to meet the need, but a lot of people don’t want outpatient programs like this in their backyard, said Tom Allen, one of the two founders of Summit Behavioral Health.

“There’s a very ‘NIMBY’ feel about it,” Allen said.

The outpatient center he and Dr. Arnold Washton opened has several patients now, but they hope to ramp up operations so they can treat as many as 100 people a month, Allen said.

In a year’s time, they plan to open two more centers in New Jersey, including a residential rehab and detox facility in Mercer County. They hope to fill it with 30 to 45 patients at a time, though they haven’t yet begun the process of applying for whatever approvals would be needed from local governments.

Their goal may seem ambitious, but local experts say such programs are needed to fill the need for addiction treatment in the area. Mercer County is home to thousands of residents who look for residential detox programs every year, but municipalities often derail plans to build such centers.

Besides the NIMBY (Not In My Backyard) objectors, “A lot of these families don’t always believe that there’s a problem in suburbia,” Allen said. “They think it’s a problem that’s endemic to Trenton or Camden or Newark, and that’s not the case.”

Allen would know. He was inspired to start the center after going through struggles of his own.

“I was an attorney at a pretty big firm in the area, had some problems, hit a bottom, and found recovery myself,” he said.

The statistics classify someone as in need of treatment based on a series of questions that determine whether drugs or alcohol are significantly affecting the person’s quality of life, according to NCADD spokesman Dan Meara.

For Mercer County, the numbers are more difficult to get, but according to employees of the local City of Angels program, thousands of people look for recovery programs every year.

City of Angels, which helps people in need get in touch with addiction treatment services, gets upwards of 20 phone calls every day and can see as many as 500 people in a week, City of Angels executive director Executive Director, Tom Allen, in the doorway of Summit Behavioral Health. Martin Griff / The Times of Trenton.Pam Wilson said.

When they come for help, Wilson said, there’s usually nowhere in the county to send them.

“There’s really nothing in Mercer. We send kids away,” she said. “For the kids with no insurance, who can’t afford to go to the out-of-state programs, there are some problems finding places for those kids.”

Even for people with insurance, sometimes leaving the state to receive treatment can be problematic, because many patients are too sick to travel, said City of Angels intervention coordinator Tom “Redneck” Clark. In an industry where one day can make a difference between life and death, Clark said, the consequences of stalling to find an available treatment center that’s close by can be disastrous.

“If they can’t get in a bed, they can’t do it any more. They can’t handle it. They give up,” he said. “They go back out, start using again. They end up on the streets and we lose them again for a few months, and usually in that time they catch more charges, get in more trouble or wind up dead.”

Other benefits of having treatment centers nearby include the ability to work with the addict’s family, Allen said.

“When people go to Florida or something, the family dynamic isn’t addressed,” he said. “You really need to involve family in the process in order for it to be successful, otherwise the addict can come home and come back to this toxic living environment, because their family didn’t seek help, and you see a lot of relapse problems.”

There are several treatment options in the county for people with no insurance, including centers run by Catholic Charities in Trenton, Corner House in Princeton and the Family Guidance Center in Hamilton, but all of those programs are for outpatients only.

According to numbers compiled by the state Division of Mental Health and Addiction Services, 2,698 residents of Mercer County were admitted to one of the rehabilitation programs affiliated with the county in 2011. Of that number, 68 percent were sent to outpatient programs and 31 percent went to residential detox centers in other counties.

Once someone with no insurance is accepted by the county’s office of addiction services to be sent to a program, he or she must wait for an opening, which could take weeks or even months, according to Kevin Meara, president of the Hamilton Township Council and a board member of the state’s Substance Abuse and Mental Health Services Administration.

The delay in treatment could cause someone with addiction problems to abandon the road to recovery. Not only that, but a delay could further complicate the process if the person is able to stay off drugs and begins to detox on his own, Meara said.

“If you’re now trying to straighten yourself out and you start to detox, now you’re detoxing on your own which, number one, is not only dangerous but, number two, now the drugs are coming out of your system, so when you go to this place, you’re no longer qualified because you don’t have the drugs in your system,” Meara said.

Keeping recovery programs local could help curb this problem — and bring an economic boom to the area as well, Meara said. The county receives money from the state to help pay for funding the programs where residents are being sent, he said, but much of that money is going to other counties, where the residential detox centers are.

The new national health care legislation will only add to the problem if more centers are not approved, Allen said, because while the number of people with good insurance will grow — increasing the demand for such centers — the supply will stay the same.

“I firmly believe in gaining the trust of the community that we’re operating in that ultimately we’re to be viewed as an asset and not a black eye,” he said.” We’re here to create jobs, develop a role in the community as a resource, just like any other small business in the area.”

Still, efforts in the past to establish residential treatment programs have been unsuccessful at the municipal level.

In June 2011, an attempt to open a detox center in Lawrence was aborted after scores of angry residents protested the plan at a series of contentious zoning board meetings. Many said they feared the detox operation might bring with it a wave of crime and other problems created by the patients.

Ignoring the property owner’s argument that a detox program would benefit the community, the Lawrence zoning board ruled 4-2 against the zoning that was needed for the center.

A year later, in June of this year, a Superior Court judge revived the case, ordering the township to reassess its ruling, saying there was a need in the community for a detox facility, and that the zoning board had erred in turning it down.

Part of the problem, according to Clark, from the City of Angels program, is the type of drug abuse that has gotten more popular. It’s no longer the hard core street drugs like heroin, cocaine or meth that are being abused, but prescription pills that kids can find in the medicine cabinets of their parents’ or grandparents’ homes, Clark said.

“People think users are all street people, homeless people, dirtbags or scumbags, but now it’s so different from how it was 20 years ago,” he said. “It’s the upper-class kids, it’s the kids of the doctors and the lawyers, and they’re being brought up right but they’re hooked on these prescription pills.”

Dan Meara, the NCADD spokesman, said the way society views people with addiction problems is another issue in the debate over where treatment centers should be located.

“I think what happens, people are more and more maybe accepting of a general problem around alcohol and drugs and addictions, especially with the recent insurgence of prescription drugs, which leads people into heroin abuse,” he said. “People say ‘Okay, this is a problem,’ but people never say ‘It’s a problem in my family, in my school, in my community.’ They say it’s a problem over there, but it’s not a problem here.”