First responders like paramedics, firefighters, and police officers face harrowing events and experiences as a part of their normal duties. They may witness the aftermath of a tragedy, respond to an event in progress, or experience danger firsthand.

Paramedics aren’t associated with dangerous job conditions like police and firefighters, but they, too, respond to disasters and accidents that could mean stepping into danger. Paramedics and emergency services workers may respond to multiple calls throughout the day, often back to back. This could mean going from one traumatic event to another with no downtime in between.

While accepting difficult days may be part of the job, it could also leave paramedics with long-term issues like mental health issues and substance use problems. There may also be steps individuals and emergency medical departments can take to mitigate risk for workers.

Learn more about substance use problems among paramedics and EMS workers.

Paramedics, like other first responders, generally have higher instances of behavioral and mental health problems than the general population. According to the Substance Abuse and Mental Health Services Administration (SAMHSA), it is estimated that 30 percent of first responders struggle with behavioral and mental health issues, compared to the 20 percent of the general population affected. These issues include depression, anxiety, post-traumatic stress, and substance use disorders.

Emergency medical service (EMS) workers often find themselves responding to calls back to back through rigorous daily schedules. SAMHSA reports that 69 percent of EMS workers don’t have time in between calls to process traumatic events. The result is a high-stress work environment and an increased risk for anxiety and depression. Substance use problems are often linked to mental health issues like depression, post-traumatic stress, and anxiety.

Depression is commonly reported among EMS workers, and the rates and severity of depression vary across several studies. Rates can be as low as 6 percent or as high as 21 percent.

Mental health problems are common among people with high-stress jobs. Unaddressed exposure to long-term sources of stress can lead to depression, anxiety, and other issues. But what does that have to do with substance use problems? Mental health disorders and addiction are common co-occurring issues. In fact, about half of people with substance use disorders also experience mental health issues at some point during their lifetime. There may be various explanations for this overlap, including common developmental and genetic risk factors. But another explanation could be something called self-medication. 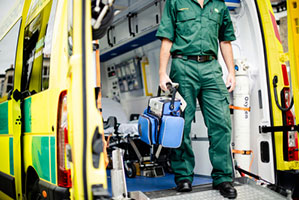 Alcohol use is extremely common in the United States. Around 85 percent of Americans drink at some point in their lifetime, especially people with stressful occupations. Drinking culture in the U.S. is usually social, and getting together with co-workers after a difficult day can be a positive way to let off steam and process trauma. However, social drinking can turn into self-medication, which is using psychoactive substances to manage mental health without consulting a professional. Self-medication with alcohol can be identified by asocial drinking, drinking to mask emotions, and drinking at odd times. Alcohol is the most common method of self-medication, but any recreational drug can take its place.

There are many barriers to addiction treatment, including your own readiness to change, fear of change, and financial challenges. However, stigma can also get in the way of seeking treatment. People who feel they will be seen as weak or unfit for their jobs may avoid admitting they need help until their problem worsens. Overcoming stigma may be one of the best ways to help combat mental health and substance use problems among paramedics and first responders.

Freedom from stigma can mean people seek out help more quickly, but it may also open the door to peer-to-peer support. In many cases, peer support is more effective than support from other sources. For instance, firefighters who were made to go through critical incident stress debriefings reported feeling that they were invasive. On the other hand, they reported positive experiences with peer support and crew bonding after traumatic incidents.