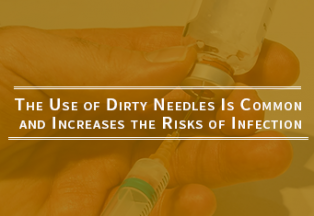 Drug abuse of any kind has risks, but some methods that abusers use to take drugs are more dangerous than others. Intravenous, or IV, drug use is the act of injecting drugs into your body. It is one of the most dangerous and invasive ways that drugs are taken. Using drugs in this way can lead to some serious medical conditions like Hepatitis C and the HIV virus, and continued use and repeated trauma to injections sites can lead to sepsis.

Contrary to most people’s understanding, sepsis is not an infection in itself. It is actually a complication that results from an existing infection. Sepsis occurs when the body releases chemicals into the bloodstream in an attempt to fight the infection that instead triggers an inflammatory response. Bacterial, fungal, and viral infections can all result in sepsis, however, bacterial infections are the most common precursors to the condition. Sepsis is also called blood poisoning because the bacteria or toxins that are produced invade the bloodstream.

Sepsis is typically categorized into three stages that have the following symptoms:

Sepsis is diagnosed when doctors have verification or reasonable suspicion that an infection exists and two of the following symptoms are present:

In severe sepsis, at least one additional symptom from the following must be present:

Any one of the above symptoms may be an indicator that organs are failing.

Septic shock occurs when the patient’s condition continues to deteriorate. They will exhibit the above symptoms and also low blood pressure that remains low even with attempts to raise it using fluid replacement.

As sepsis progresses, it becomes increasingly dangerous for patients. Treatment must be started as early as possible for the best outcome.

IV Drug Use and Sepsis

Using drugs intravenously can introduce a number of pathogens and toxins into your veins and body, which makes you susceptible to infection. Pathogens are disease causing microorganisms that include viruses, fungi, and bacteria. Staphylococcus aureus (MRSA, as it’s most commonly known) is the most common bacteria to cause infections in IV drug users.

Pathogens are commonly transmitted due to the improper or unhygienic handling of needles. When a person becomes addicted to a substance, his or her need to use becomes so strong that there is little or no thought given to his or her health. The use of dirty or shared needles at this point is common and increases the risks of infection.

Even if you do not share needles, IV drug use is still risky. Many IV drug abusers will use the same needle repeatedly to inject the drug. This is dangerous because bacteria can grow on the needle and then be transmitted to your bloodstream and body tissue. That does not mean that using new needles every time will eliminate the risk of infection. If the injection site is not properly cleaned, you can still be at risk of infection.

Types of IV-Related Infections That Cause Sepsis

There are a variety of infections that IV drug abuse can cause – some of which can be fatal. One of the biggest reasons that these infections are life-threatening is because they cause sepsis.

Some of the infections that can lead to sepsis are:

Endocarditis – This is an infection of the inner-lining of the heart caused by bacteria, fungus, or viruses.

Cellulitis – This is an infection of the skin and underlying tissue that spreads out across the limb.

Necrotizing fasciitis – This infection is commonly called a flesh-eating disease that causes the body’s soft tissue to die and is very aggressive.

While it is true that prolonged or repeated use makes the risk of infection and sepsis more likely, if you use IV drugs, even sporadically, you are exposing yourself to dangerous possibilities; it is possible to contract an infection from even one use.

Because sepsis poisons your body and blood, the longer time that goes by without treatment, the greater the risk of complications, and death. It can become so detrimental that your organs begin to struggle to function properly and may fail. Sepsis, along with the original infection itself, can increase the risk of death even further.

Even when a person recovers from sepsis, there can be long-term effects including:

It’s crucial that if you believe you have an infection or that you are developing sepsis, that you seek medical attention immediately. It progresses quickly and your life may be in danger. When you seek treatment, it’s likely that you will be administered a broad-spectrum antibiotic first. This is to address the infection and the bacteria that caused it. Once testing is done, your medication may be changed to treat a more specific bacterium.

Other treatments for sepsis may include:

If your sepsis is in advanced stages, you may require:

While sepsis can be treated and you can get better, it’s important that you also consider treating your IV drug addiction by entering drug rehab treatment. Rehab through Summit will include therapy, addiction education, relapse prevention, life and coping skills, and psychiatric care (if needed). It will give you the tools you need to stop using IV drugs and to stop putting yourself at risk of developing life-threatening infections and sepsis.