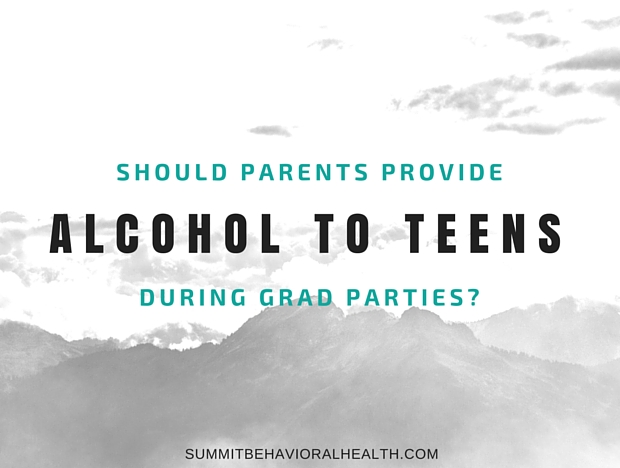 Completing high school is one of life’s most memorable moments and biggest achievements, which is often punctuated with celebrations with friends and family. While high school graduates are officially heading into young adulthood, this doesn’t mean the celebration with alcohol has to automatically co-occur.

It has become commonplace for parents, often in an effort to be “friends” with their children, to provide alcohol at graduation parties. What’s wrong with a celebratory glass of champagne or a cold beer to toast the monumental achievement of graduating high school, right?

Sadly, promoting underage drinking is a recipe for big problems that can lead to devastating consequences for both parents and teens. From legal problems and accidents to dangerous overdoses, the risks of giving minors alcohol at parties are very real.

One Drink Becomes Too Much

Many teens simply do not have the capabilities of knowing when to say when. In other words, they do not have the experience yet to know when they’re crossing over from enjoying a glass of alcohol to becoming dangerously intoxicated. For some, a single glass is enough to fuel poor decision-making. When there is free-flowing alcohol, the likelihood is great that a teen will continue to imbibe until they are drunk. Just consider the numbers.

According to the National Institute on Alcohol Abuse and Alcoholism, more than 5,300,000 young people, ages 12-20 engage in binge drinking.

And, nearly 2,000 of those under the age of 21 die each year from alcohol-related motor vehicle crashes.

Under the Influence of Alcohol

Alcohol can have a profound influence on a teen’s decision-making skills. This greatly increases the chance of accidents, fights and making poor decisions about sex. If you’re the parent who is hosting a party for underage drinkers, you may be forced to break up a situation or even call the police when your event spirals out-of-control.

The Legal Ramifications of Serving Alcohol to Minors

The legal drinking age in the United States is 21, and every state has made it illegal to sell or supply alcohol to anyone who is underage. Providing alcohol to minors is normally a misdemeanor offense. However, it can be considered a felony depending on the specific case and the state in which it occurs. The difference between a misdemeanor and a felony offense typically depends on intent and whether anyone was seriously injured or killed as a result of supplying the alcohol. I.e., a minor who causes a motor vehicle accident following a party where they received alcohol from an adult could result in that adult being convicted of a felony.

Penalties for such cases can result in:

Jail time – Sentences for misdemeanor convictions of supplying alcohol can be as long as a year in county jail. Felony convictions may result in federal prison time of a year or longer.

Fines – Misdemeanor fines for supplying alcohol can range from $500 to more than $5,000. Felony fines can often exceed $50,000. There is also court costs and the high price of a defense attorney.

Probation – Probationary sentences are commonplace for first-time offenders. These typically last 12 months and require specific actions and regular check-ins with a probation officer.

Don’t Be That Parent

As a parent, your first and foremost responsibility is to protect your child. By serving alcohol, you may think that you’re giving your teen a celebratory treat for graduation, but rather, you’re simply putting them at risk. You’re also placing yourself in the dangerous position of being responsible for other minors who drink under your supervision. There are plenty of other ways to celebrate the end of school. Alcohol isn’t the answer.

Do You Have a Problem With Alcohol?

You’re not alone. More than 16 million individuals, ages 18 and older have an alcohol use disorder in the United States, according to the National Institute on Alcohol Abuse and Alcoholism. The good news is that help is available. Call Summit Behavioral Health now to speak with an addiction specialist. A future free from hangovers, regrets and bad decisions can be yours.