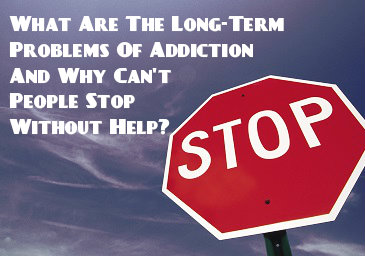 Addiction is defined as the fact or condition of being addicted to a particular thing, substance or activity. It is estimated that over 23 million people in America are battling an addiction. Unfortunately, many of these people never get the help that they need and the disease of addiction ultimately ruins their lives.

Addictive substances give a person a feeling of pleasure, which is one of the reasons it is so hard for people who are using drugs and alcohol to stop. It takes more and more of the drug to reach the same feeling, which is why occasional use can quickly turn into more aggressive use, resulting in an addiction.

Researchers have found that addicting substances can stimulate the release of dopamine. Dopamine is a neurotransmitter that helps regulate the pleasure and reward center. However, his release of dopamine is only temporary, which is what caused addicts to continue to use more of the addictive substance. It is important to remember that addiction is a disease and it requires professional treatment just like any other health condition.

Consequences Of Addiction On The Body

There are a number of medical problems associated with addition.  Long-term drug use can wreak havoc on the kidneys, liver, heart and lungs.  Kidney failure is one of the most common medical problems associated with addiction.  Kidney failure is frequently linked with heroin and crystal meth use. Liver failure is a medical problem that is very common in people who abuse alcohol, but it can also occur if a person abuses any other types of drugs like Oxycontin and Vicodin. The heart is usually affected by long-term drug use. People who use drugs are at an increased risk for developing heart failure or a heart attack.  Furthermore, people who smoke any type of drug are putting themselves at risk for developing lung cancer or lung related medical issues.

Consequences Of Addiction On Personal Life

Addiction also negatively affects work performance.  Addicts are more likely to miss work due to an illness or due to the addition itself. They are also more likely to steal from and get injured while on the job.

It is important to note that addiction can easily get one in trouble with the law. For example, if an individual is caught using an illicit drug, such as cocaine or heroin, or driving while under the influence of drugs and alcohol, it could land a person in jail and cause hefty fines.

The Importance Of Addiction Treatment

Drug addiction does not have to ruin one’s life. Many people have gone on to live healthy, fulfilling lives after they have gone through treatment. Summit Behavioral Health addiction specialists can help an addict get back on the right track.