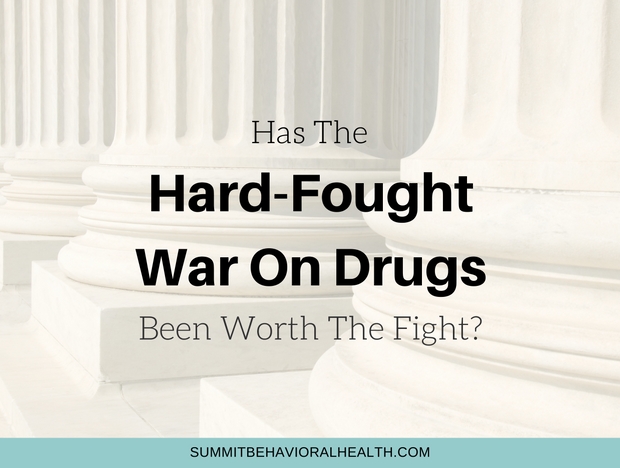 The United States has a long, complicated history of fighting drug and alcohol abuse. The first anti-opium laws were passed back in the 1870s and were directed at stopping usage by Chinese immigrants. Anti-cocaine laws were implemented in the early 1900s, and laws to stop marijuana use date back to the 1910s. Then, of course, there was a national constitutional ban on the production, importation, transportation and sale of alcoholic beverages from 1920 to 1933.

In the 1960s, drug use increased significantly as they became symbols of youthful rebellion, political dissent and social upheaval. This led to President Nixon declaring a “War on Drugs” in 1971. As part of his push to stop drug use, he increased the size and presence of federal drug control agencies and pushed through measures such as no-knock warrants and mandatory sentences for drug possession. He also placed marijuana in Schedule I, the most restrictive category of drugs, pending review by a commission he appointed.

Interestingly, this commission unanimously recommended decriminalizing the possession and distribution of marijuana for personal use. However, Nixon ignored the commission’s recommendations.

During the mid-1970s, 11 states decriminalized marijuana possession, and President Jimmy Carter lobbied for marijuana decriminalization at the federal level. In October 1977, the Senate Judiciary Committee voted to decriminalize possession of up to an ounce of marijuana for personal use. However, as the 1970s came to an end, the political tide had dramatically shifted.

With Ronald Reagan as president, incarcerations for drug use dramatically increased due to the expansion of the drug war. In fact, the number of people in jail for nonviolent drug law offenses increased from 50,000 in 1980 to more than 400,000 in 1997.

Much of the concern over drug use was spawned by the media showing people who were addicted to the smokeable form of cocaine called “crack.” This led to President Reagan’s wife Nancy launching a highly publicized anti-drug campaign with the slogan, “Just Say No.”

The DARE drug education program was also launched nationwide despite a lack of evidence of its effectiveness. Harsh drug policies stopped syringe access programs, which may have contributed to the rapid spread of HIV and AIDS in the 1980s and 1990s.

When Bill Clinton took office in 1993, he began advocating treatment instead of incarceration. However, he quickly reverted to the drug war strategies of his Republican predecessors and actually escalated the drug war.

At the start of the new millennium, President George W. Bush allocated even more money to the drug war despite the fact that illicit drug use remained constant throughout the entire war on drugs and overdose fatalities were rising rapidly. President Bush also escalated the militarization of domestic drug law enforcement. By the end of the Bush presidency, there were approximately 40,000 SWAT raids on Americans each year.

Largely because of the lack of evidence that the War on Drugs had been successful, President Barack Obama has advocated reforms, including ending the ban on federal funding for syringe access programs and supporting state medical marijuana laws. Yet, he has yet to shift drug control funding to a health-based approach. Public opinion is also shifting towards reforms that reduce the criminalization of drug use and increase the focus on treatment and recovery.

With increasing research into the causes of drug use and addiction, it’s likely that there will continue to be more reforms in drug policy. Such changes could include expanding access to evidence-based treatment programs that can help people overcome addiction and break the cycle of this disease that is often passed down generation to generation.

Do You or a Loved One Have a Drug Addiction?

Unfortunately, many individuals are still arrested and incarcerated because of drug use. Don’t take chances. If you are struggling with addiction, help is available. Call us now to learn about treatment options.