Drug Use at Work

When it comes to politics, religion, and even your sex life, there really is a time and a place for every type of discussion. Some topics may be better kept within your private circle and out of the office. Being comfortable around co-workers and perhaps even calling them friends may be beneficial to productivity and overall job satisfaction, but in some workplaces, that doesn’t equate to a free-for-all on work conversations.

Many companies have long-standing drug and alcohol policies, prohibiting illicit use in the office and sometimes outside of it. Pre-employment drug testing or random employee screenings are still common practice, making drug use a hush-hush topic between many co-workers.

But as more states across the U.S. legalize marijuana for medical and recreational use and workplaces become more relaxed in general, how are employees approaching the topic of drugs in the office? We surveyed over 1,000 fully employed people who consume drugs recreationally to see how they approached the topic among colleagues (if at all). Keep reading to see if drug use remains a taboo work topic and what consequences may result from workplace drug discussions.

In the United States, politics, religion, and sex typically fall under the umbrella of topics not to be discussed in most settings. But times are changing. Despite the current political climate, evolving workplaces have led some corporate leaders to actually encourage office talk to include some sensitive topics.

While there are unofficial rules for entering into that territory, nearly half of employees still find the topics of politics, religion, and sex the most uncomfortable to broach with co-workers.

Fifty-nine percent of employees were uncomfortable discussing sex with colleagues, making it the most-avoided topic, but recreational drug use wasn’t that far behind, with 43% being uncomfortable with the topic.

Surprisingly, discussing drugs in the workplace was found to be more uncomfortable than both salary and discrimination. The discomfort associated with talk of drug use may be tied to the consequences that can come if an employer finds out about it – a failed drug test can quickly lead to unemployment, even if the drug in an employee’s system is legal to use in the state.

According to the latest figures, nearly 10% of Americans aged 12 or older admitted to using drugs in the past month. Despite the topic being high on the discomfort scale, more than half of recreational drug users surveyed admitted to discussing their drug use with co-workers. Men were slightly more likely than women to do so, but 35% of overall users even discussed their drug use with their boss or supervisor. Of course, the relationship between employee and employer is an important factor when deciding which topics are appropriate to discuss. However, even when a close friend becomes a superior, keeping personal information out of the office is often the best route to take.

Not every recreational drug user brings up their use with their co-workers – 47% never do. But for those who do, 19% only bring it up a few times a year. Marijuana was the drug most commonly discussed with co-workers, likely due to its increasing legality and wider acceptance compared to other drugs.

Painkillers were also a common topic of discussion, with 38% of users talking about them with co-workers. It may be expected that employees are most comfortable bringing up marijuana, but considering the backlash and villainization of painkillers as major contributors to the opioid epidemic, it could prove surprising to some that more than one-third of users are comfortable talking about them in the workplace.

Discussing drugs at work usually doesn’t help employees move up in the company, so what’s their reasoning for broaching the subject? For 80% of men and 77% of women, the conversation was actually initiated by a co-worker. It was also very common for both men and women to report feeling comfortable discussing drug use simply because a co-worker was being candid about it.

Previously smoking or consuming drugs with a co-worker may make the topic of discussion easier to broach, but if the interaction hasn’t occurred in the past, bringing up drugs can have a serious impact on colleague perceptions and employee dynamics in the workplace. Even in the most liberal of offices, drug discussions can change the way the user is viewed, make others uncomfortable, and even put their job at risk.

While offices are becoming more like a home away from home, some industries are more relaxed than others. When it comes to discussing drugs, the industry certainly matters. Employees in the hotel, food service, and hospitality industry are the most likely to have discussed drug use with co-workers – a whopping 75% of employees have admitted to doing so. This may have to do with increased drug use by workers in that industry, though. In 2015, a study by the Substance Abuse and Mental Health Administration found the food service industry to rank highest for rates of substance use disorders. And with many food service employees working around alcohol, the industry also ranked third highest for rates of heavy alcohol use.

Surprisingly, job level doesn’t seem to have much of an impact on whether or not employees discuss their drug use with their co-workers – at least half of all employees across every job level have participated in a drug discussion, with entry- and mid-level workers slightly more likely to do so. However, the difference between genders is interesting. From entry-level to executive and senior positions, men were more likely to discuss drugs at work, with associate-level employees straying from the topic the most.

On the other hand, women in executive and senior positions were the least likely to have discussed drugs with co-workers, with only 46% doing so. Women as a whole, and those in executive positions specifically, likely stray from discussing drugs in the workplace due to the discrimination they already face. While 64% of women experience microaggressions at work, the scrutiny women face increases along with their job level. Breaking the glass ceiling is difficult enough already, but adding drugs to the mix can make the scrutiny and judgment women in leadership face all the worse. 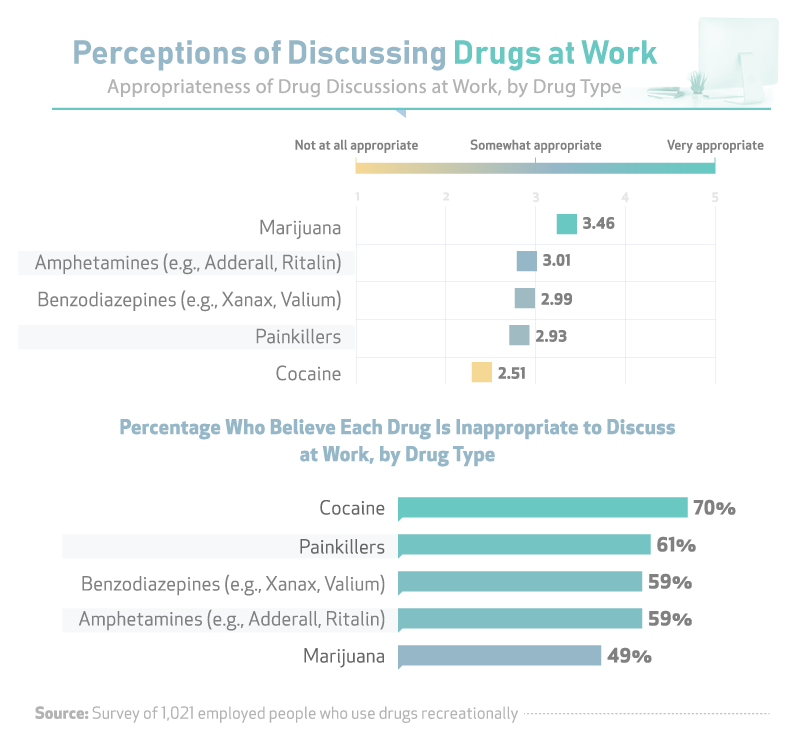 Marijuana legalization may be helping employees feel more comfortable discussing their use of it at work, but that doesn’t mean that everyone finds it appropriate. When rating drugs by appropriateness to discuss at work (on a scale from 1 to 5, with 5 being very appropriate), marijuana was rated a 3.46 – more appropriate than any other drug surveyed but still a ways from “very appropriate.” On the other hand, cocaine was rated only a 2.51 on the appropriate scale, with 70% believing the drug is inappropriate to discuss in the workplace.

Despite being rated as the least inappropriate drug for work discussions and its increasing legality, marijuana remains a Schedule I drug under federal law, classifying it under the same category as heroin. While cocaine is classified as a Schedule II drug – technically below marijuana – this doesn’t necessarily mean the DEA views it as more dangerous. Instead, both drugs are listed as demonstrating a high potential for abuse, with the only difference being marijuana is also listed as having no currently accepted medical use.

Whether or not employees find it appropriate to discuss their drug use at work likely won’t matter when the boss gets wind of the conversations occurring. While only 17% of employees reported experiencing negative consequences due to their drug discussions, some were more severe than others. Overall, among employees who faced consequences, 38% reported getting an official warning and 37% were made fun of by co-workers.

Interestingly, men and women experienced some differences in the consequences they received. Men were significantly more likely to receive an official warning from their employers – while only 27% of women received official warnings, 46% of men did. But women seemed to experience more severe consequences for discussing drugs at work – 32% of women were fired for drug talk, while only 17% of men were left unemployed.

However, the potential consequences weren’t the main reason employees strayed from discussing drugs. Rather, 58% simply considered it inappropriate and 45% didn’t like telling co-workers personal details about their lives. Consequences weren’t completely forgotten, though. Forty-three percent of employees kept the negative consequences in mind when deciding what topics were too taboo for the workplace.

There may never come a time when employees feel comfortable bearing all at work and diving into discussions about politics, religion, or sex. But recreational drug use may be making its way into conversations between colleagues due to increasing legalization. Regardless of the type of drug, many employees still find those discussions to be better kept out of the office. And when it comes to consequences, that may be employees’ best bet. Companies don’t seem to care if drug use is legal or illicit – if it goes against their policies, discussing drug use in the office can lead to being fired.

If there’s one upside to discussing drug use in the office, it’s recognizing that a co-worker may be struggling. The signs of addiction may be difficult to spot at first, but if drugs are a common topic of discussion, there may be more going on than meets the eye. At Serenity at Summit, we are committed to providing those suffering from substance abuse the help they need to overcome addiction for life. Through personalized treatment and intimate settings, we make sure a long-lasting recovery is possible. To learn more or talk with an intake specialist, visit us online today.

Using the Mechanical Turk Service from Amazon, we surveyed 1,021 people who are fully employed and consume drugs recreationally to analyze how appropriate talking about drug use at the workplace is. Of our respondents who said they consume drugs, 47% said they never discussed their drug use with co-workers while 53% of employees said they did discuss drug use with co-workers. Our survey respondents consisted of 53% males and 47% females. The average age of participants was 52 with a standard deviation of 9 years. Participants ranged in age from 20 to 69 years of age.

Because this was a survey-executed campaign, certain limitations apply, such as telescoping, exaggeration, and selective memory.

About Steph L.: Stephanie is a writer for Serenity at Summit and has dedicated her career to creating well-researched content so that those that are in search of treatment can find the help they need.