Is Kratom Addictive? How & Why?

Kratom is potentially addictive. While research is currently inconclusive regarding the drug’s addictive potential, it is believed to cause dependence with chronic use.

Most people who enjoy coffee and tea probably believe that all substances that come from a plant are good. Kratom is yet another naturally occurring drug that has become popular because it is not commonly associated with addiction or other risks.

It originates from Southeast Asia, where it has been used to treat pain and related ailments. Kratom is derived from a kind of evergreen tree, and it works similarly to opioids.

Scientists are still piecing together how kratom can have an effect on the brain, but the plant’s elements mimic the effects of opioids. Kratom is known to relieve pain and have sedative qualities.

As of now, the National Institute on Drug Abuse (NIDA) mentions that its opioid-like functions do cause dependence. Some individuals have also reported that they feel addicted to kratom.

A 2015 press release from the U.S. National Institutes of Health (NIH) states the following pain statistics:

This helps to explain a primary motivator behind the opioid crisis today. For some people, kratom is seen as a way to relieve this pain without subjecting themselves to the risks of becoming addicted to opioids of any kind.

Kratom became known as an alternative to opioids. It is sold in smoke and tea shops. In an article from January 2019, The New York Times states that kratom is now marketed on health and wellness circuits.

It is the subject of a documentary called A Leaf of Faith, and professional wrestlers, athletes, and even military veterans use the substance. Kratom is touted as a form of natural relief for anxiety, post-traumatic disorder, and pain.

Kratom has been used in Thailand, Malaysia, and Indonesia to boost workplace productivity, promote relaxation, and as part of some religious ceremonies.

The New York Times also reports that kratom has been used to help those struggling with opioid addiction curb their use of opioids. However, some say that when kratom is used for opioid withdrawal, it may worsen the problem it is supposed to solve.

As of now, three states prohibit the sale of kratom, but anyone in the United States can buy it online.

A VICE article from February 2014 reports that kratom had become popular in both Florida and North Carolina. Some cafes even catered to people who were recovering from opioid abuse, including an establishment called Kat 5 Kava in Wilmington, North Carolina.

The report mentions that people often think kratom is safer because it is not an illicit or prescription opioid. 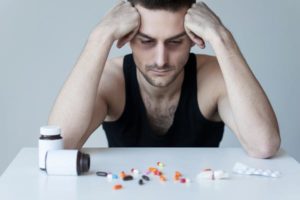 Kratom is said to have properties similar to opioids. People tend to drink it as tea, take it as an extract, tablet, or pill. In some cases, people even smoke the dried leaves. The leaves are said to alter the mind or produce psychotropic effects.

The plant works by changing the body’s response to pain and providing a pleasant effect when taken in large quantities. As NIDA states, kratom contains the compounds 7-hydroxymitragynine and mitragynine. These elements bond with the brain’s opioid receptors and cause kratom to act as a sedative.

Like any other substance, there are side effects to kratom. These can include the following:

In extreme cases, kratom can cause a loss of touch with reality (psychosis) and hallucinations.

Like other drugs, it can cause dependency. Kratom users often experience withdrawal symptoms when they stop taking the substance.

Taking kratom in a concentrated form, along with alcohol or other substances, could make its addictive properties worse.

In February 2018, the U.S. Food and Drug Administration made a statement regarding their current research on kratom’s potential for misuse. The FDA mentioned a few concerns.

The FDA has determined that kratom has a potential for abuse.

The report also mentions that so far, the U.S. Drug Enforcement Administration (DEA) considers kratom a drug of concern.

A report on drug addiction by NIDA says addiction is considered a complex, relapsing disease. A person makes the choice to try a drug out of their free will, but consistently using drugs causes changes in the brain that make it hard for a person to quit using the substance on their own.

The majority of drugs trigger misuse because they have an undue influence on the reward circuit — a function in the brain that allows a person to succeed at maintaining positive habits, such as eating healthy and spending time with loved ones.

Once a person starts misusing a substance, they can no longer feel happy with things they used to enjoy. A meal with friends, spending time with family, and excelling at work or school may no longer bring the same joy that drug use does.

It is now known that opioids, such as heroin, morphine, and prescription painkillers, have this effect on the brain. Consistent drug use also causes the body to build tolerance for the drugs, and often, dependency forms.

Tolerance causes a person to require a larger dose of a given substance. Dependency means their body and/or brain needs the substance to function in their new normal capacity.

Despite kratom’s touted benefits, some data shows it can lead to abuse issues of its own.

Kratom is very similar to opioids. NIDA mentions that at least 44 deaths have been linked to kratom between 2011 and 2017. It is possible to overdose on kratom.

Extensive studies still need to be conducted to provide actual numbers and demographics for kratom use and misuse. Maria Weeks wrote an article on The Fix detailing her experiences with kratom addiction.

Weeks says she began taking kratom pills so she could quit using opioids. Her quest was innocent enough, but she soon began spending $30 per day to support a new habit.

Weeks mentioned how she caught herself lying to her husband. Missing a dose of kratom caused her to have panic attacks. Though she was able to stop, she relapsed before being able to quit.

A case study published in June 2018 by the Journal of Community Hospital and Internal Medicine Perspectives described a 32-year-old man who took kratom and acetaminophen. He was an occasional drinker who had a liver injury that landed him in the emergency room.

Doctors were able to treat him with much success, and they determined that his injury was the result of using kratom as an herbal supplement. The case study shows people might obtain injuries from using kratom even if they do not become addicted to the substance.