Alcohol and Depression: Is There a Link? What the Research Shows

While the short-term effects of alcohol can result in feelings of heightened well-being, long-term patterns of heavy drinking can lead to depression. If depression is already present, drinking can worsen it.

When you drink alcohol, you may experience effects such as:

Each type of alcohol has a different percentage of ethanol, or alcohol by volume (ABV). This means that appropriate serving sizes of alcohol are different, but they are based on how much alcohol your liver can process in an hour.

Specific alcohol can have different ABV, so if you plan to drink, it is important to read labels to know if a certain type of alcohol has a higher ABV than average. If you order a drink in a bar or restaurant, drink slowly to make sure your liver can metabolize it. The U.S. Centers for Disease Control and Prevention (CDC) states that there is no such thing as safe drinking, but drinking moderately reduces the risk of chronic health damage, including ulcers, liver damage, heart disease, and cancer. 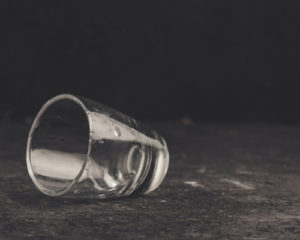 Drinking beyond moderation is harmful. Even if you do not have alcohol use disorder (AUD), which used to be called alcoholism, heavy drinking and binge drinking are both risky for one’s physical and mental health. The CDC defines binge drinking as five or more drinks in a single occasion or about two hours; heavy drinking involves consuming one to two servings of alcohol every day on average or between seven and 14 servings per week.

According to the Diagnostic and Statistical Manual of Mental Disorders, Fifth Edition (DSM-5), alcohol use disorder may involve both heavy drinking and binge drinking, but it is primarily defined as compulsive behaviors around alcohol, drinking more or longer than intended, experiencing withdrawal symptoms when unable to drink, and craving alcohol. About 90 percent of people who drink heavily or binge drink are not addicted to alcohol, but these behaviors can still trigger serious, chronic issues.

One of the risks of drinking too much is depression; however, depression can also lead someone to drink too much in attempts to feel better.

Depression is a term covering several versions of mood disorders with similar symptoms, including:

There are many different types of depression. They include:

This involves experiencing some of the symptoms above for most of the day, every day for two weeks, to the point that they interfere with your ability to go to work or school, take care of family, and have a good quality of life. Often, people who have persistent or major depression experience these periods several times during their lives.

Symptoms of depression last at least two years. People with this diagnosis may also experience major depressive periods during their lives and then periods of less severe symptoms.

This is cyclical depression triggered by a change in season. It is typically associated with winter. It rarely occurs in people during the summer due to changes in sunlight.

Periods of depression occur in people who struggle with psychotic disorders, such as schizophrenia. Hallucinations, delusions, or other symptoms that have a depressive aspect like guilt or sadness may be present.

Depression may be triggered by major life changes, including moving away from friends and family, job loss, major illness, and death. This mood disorder also has a genetic component. People whose family members have depression or substance use disorders are more likely to also struggle with depression. 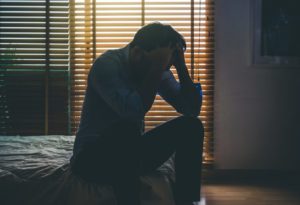 The symptoms of depression are typically caused by a deficit of serotonin and dopamine, which are neurotransmitters associated with managing mood and physical energy. Many people who struggle with depression begin to abuse substances, including alcohol, because intoxicants often release more neurotransmitters into the brain as long as the drug is active.

When the substance is metabolized out of the body, however, neurotransmitters may return to their original, low level, or they may be lower than they were before. This can cause compulsive behaviors, leading to more alcohol consumption, which can become an addiction.

People who abuse alcohol may also trigger depression because they artificially regulate the neurotransmitter balance in their brains. A withdrawal symptom associated with alcohol dependence is feeling depressed, and a long-term change to the brain’s structure may involve depression.

Drinking alcohol can temporarily stop the release of some neurotransmitters that make you feel bad, and it can suppress the areas of the brain that focus on heavy thinking and planning. For people struggling with depression, this can take the edge off guilt, sadness, and memories that may trigger negative feelings.

Drinking Too Much Can Trigger Depression.

Regular drinking, even at moderate daily levels, reduces the amount of serotonin produced by your brain. Because drinking alcohol triggers the release of serotonin and dopamine, it may make you feel better in the short term, but it depletes these chemicals from the brain over the long term.

Risks of Both Depression and Alcohol Abuse

If you have depression, you are at risk for developing AUD, and vice versa. As a result, it is important to note the risks associated with these two conditions.

Getting treatment to stop abusing alcohol can help you feel better after withdrawal has been safely managed. Abstinence from alcohol for three to four weeks can greatly improve symptoms of depression.

A study published by the Journal of Studies on Alcohol and Drugs found that quitting alcohol can rapidly improve symptoms of depression. Symptoms will lift in three to four weeks after quitting alcohol, especially in people who have substance-induced depression.  People who have depression that triggered substance abuse may experience improvement of depression symptoms as well, but they require ongoing counseling and may need antidepressants to manage their condition.

Detoxing from alcohol requires medical oversight, especially for people who consumed a lot of alcohol for a long time. Physical dependence on the substance can lead to severe health risks when quitting, so medical supervision is needed. Ultimately, quitting alcohol can lead to rapid benefits, and for people with co-occurring disorders, this is the first step in managing both alcohol use disorder and depression.