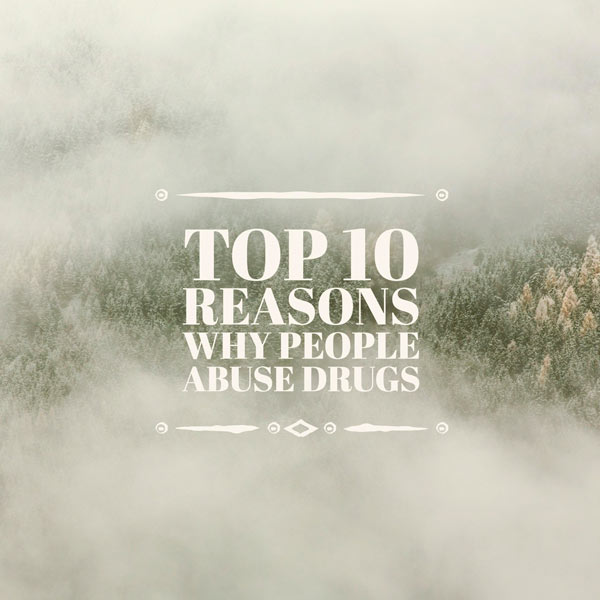 There are many reasons why people fall into drug or alcohol abuse. Here are the top 10 reasons as reported by NJ addiction treatment center.

When most people think of drug addiction, they picture someone who is incapable of holding down a job, having a family, or functioning in everyday society.  The reality is that most individuals with a drug addiction disorder are employed, and many of them have spouses and children. In other words, there are no one-size-fits-all parameters for drug addiction reports NJ drug addiction treatment center.

1) They Get a Prescription

Since 1999, there has been a 300 percent increase in the sale of prescription painkillers like Vicodin and OxyContin. When people receive a prescription from a physician, they assume it’s safe to take. However, these powerful painkillers are actually far more addicting than street drugs. To illustrate this point, according to the Herald Dispatch in Huntington, WV in Cabell County, WV there were more than 40 million doses of opioid pain medication sold between 2007 and 2012 with a population of only 96,317 residents, according to the 2010 census.

To learn more about which legal drugs are most often abused read What Are The Top 10 Most Addictive Legal Drugs.

2) They Feel Oppressed and Want to Rebel

Young people especially feel intense pressure to “break the mold” or free themselves of restrictions. This can lead some teens and young adults to try drugs as a way of standing out from a crowd or rebelling against a parent or authority figures.

3) Alcohol and Certain Drugs Can Be Obtained Legally

Many substances are perfectly legal to buy, affordable, and easy to get. For example, alcohol is legal for anyone over 21 years old to purchase. When it’s abused, however, it can be deadly.

People who suffer from mental health disorders such as anxiety, bipolar disorder, or depression may turn to drugs in an attempt to alleviate their symptoms. Unfortunately, using drugs to self-medicate only exacerbates mental health issues, which can create a cycle of dependency and abuse that is difficult to break.

5) They’re Pressured by Others

Peer pressure is a major problem for children, teens, and young adults. When fitting in with a group is the most important problem facing a child or teen, it can be difficult to say no to drugs or alcohol when friends are using it.

Just as young people and teens are often pressured by peers to try drugs, they are also more inclined than adults to experiment. It’s also easy to start out with a less dangerous drug, such as marijuana, and then move on to deadly substances like opioids.

Modern life is chock-full of stressors. The demands of work, family, and other responsibilities often force people to perform a constant juggling act. When the stress becomes too much, some individuals turn to drugs as a way to cope and ultimately function, but only temporarily.

Individuals who feel lonely may attempt to find solace in drugs. However, filling up a void with drugs typically leads to more intense feelings of isolation.

People who have suffered an emotionally painful trauma, such as a troubled childhood or past abuse, may turn to drugs as a means of coping with a memory that prevents them from fully addressing the root cause and being able to move on.

Although not everyone with a physical injury gets hooked on painkillers or other types of legal drugs, this is a gateway for many people. Many opioids are so powerful and insidious that most patients don’t even realize they have become addicted to until they attempt to quit.

Serenity at Summit offers inpatient and outpatient programs, as well as medically supervised detox, to help people with a drug abuse problem overcome prescription and illegal drug addiction or alcoholism. You can reach a substance abuse professional at 1 for more information about opioid drug addiction or alcohol detox treatment plans designed to help you achieve long-term recovery.