The opioid addiction overdose crisis has hit communities across the United States, causing deaths, illness, and grief. Thousands are dying from using potent prescription medications or illegal drugs, such as heroin and others that contain the lethal opioid fentanyl.

The National Institute on Drug Abuse underscores how widespread the epidemic is, saying that nearly 70 percent of all overdose-related deaths in the U.S. in 2018 involved opioids.

The epidemic has hit Massachusetts particularly hard from early on. “From 2010 to 2016, the opioid-related mortality rate in Massachusetts increased more rapidly than the national average,” according to a Massachusetts Health Policy Commission analysis.

The study also notes that in 2026, the state had the highest rate of opioid-related cases treated by emergency departments across the state, according to data reported to the Agency for Healthcare Research and Quality.

Massachusetts continues to track the toll of the opioid addiction crisis in the state. “In 2019, there were 1,952 confirmed opioid-related overdose deaths, and DPH estimates that there will be an additional 61 to 64 deaths,” according to data in a report from the Massachusetts Department of Public Health.

Data from the first quarter of 2020 show a continuation of opioid-related deaths. Between January and March 2020, “…[Th]ere were 112 confirmed opioid-related overdose deaths and DPH estimates that there will be an additional 319 to 393 deaths,” the report says.

According to the report, preliminary data from January through March 2020 show 467 confirmed and estimated opioid-related overdose deaths, which the report says is an estimated 28 fewer deaths, and a 5.7 percent decline compared to the first quarter of 2019.

As the states continue to battle against drug-related overdoses, some people personally battling with an opioid addiction of their own will take matters into their own hands and end or reduce their dependence on opioids. Massachusetts offers opioid treatment options for those who want to recover from opioid use disorder (OUD).

Massachusetts has been battling opioid addiction for a long time. About 88 percent of drug overdose deaths in Massachusetts involved at least one opioid in 2018, according to NIDA’s data. It also reports, “Fatalities involving synthetic opioids other than methadone (mainly fentanyl and fentanyl analogs) increased to 1,806 (a rate of 26.8) in 2018 and were involved in more than 90% of all opioid-involved deaths.”

There is clearly a need for opioid treatment in the state, and not everyone battling opioid dependence or addiction has to risk having a lethal overdose. Opioid misuse and abuse can be treated with professional care that addresses substance use disorders (SUDs).

Medication-assisted treatment (MAT) is a widely used approach to treating disorders involving opioids and alcohol use. It combines the use of prescription medications, behavioral therapies, and counseling to address the “whole-person” as they work through the various physical, mental, and psychological factors that contribute to their substance use.

MAT has helped people who relapse whenever they have tried to end their opioid use, including people who use heroin. The approach has also helped people recovering from heroin use and other prescription medications with opiate ingredients.

People who enroll in a MAT program can expect to:

The Substance Abuse and Mental Health Services Administration (SAMHSA) says the main goal of MAT is to help people recover from chronic opioid use. The federal agency says the treatment strategy:

Treatment for substance use disorders varies by the person receiving it, which is why treatment plans are effective when individual needs are taken into consideration. However, medication-assisted treatment has received widespread support. It has been credited with helping prevent opioid overdose with prescription medicines backed by the U.S. Food and Drug Administration (FDA) that help block the effects of potent opioids.

Suboxone, buprenorphine, naltrexone, and methadone are the medications usually administered to patients of a MAT program. All are used to help wean people off the stronger opioids they were using gradually. Tapering is effective because it gives the body time to adjust as the drug’s presence is slowly minimized.

SAMHSA explains the role of prescription medicines in a MAT program and how they work. According to the agency, “The prescribed medication operates to normalize brain chemistry, block the euphoric effects of alcohol and opioids, relieve physiological cravings, and normalize body functions without the negative effects of the abused drug.”

Will Medication-Assisted Treatment Work For Me?

Treatment for substance use disorders can involve multiple approaches, so it won’t look the same for everyone. Medication-assisted treatment, despite its high marks, might not be for everyone. SAMHSA reports that MAT has led to positive results for some people who have tried it. Still, MAT is not used as much as one would think, SAMHSA says.

Some view the use of medications to help people end a substance use disorder as exchanging one dependence for another, but SAMHSA disagrees. It says that there are no adverse effects when the FDA-approved medications are used in the proper dosages.

Without these medications, it says, it would be challenging for opioid-dependent people to find relief from harrowing withdrawal symptoms and mental drug cravings that often lead to relapse. 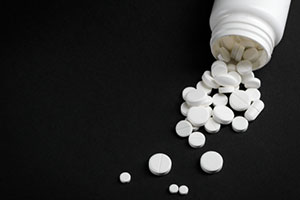 “MAT programs provide a safe and controlled level of medication to overcome the use of an abused opioid,” SAMHSA writes.

MAT patients also must agree to follow certain rules of the program. Before they can begin, they must agree to receive monitored medical care, help with finding employment, and other services that promote their recovery.

There are accredited rehab facilities in Massachusetts that offer medication-assisted treatment for OUD. If you or a loved one are interested in starting a MAT program, it can be just the new start you need to turn your life around.

Serenity at Summit can help you explore your MAT options. Depending on the severity of opioid dependence, an addiction care professional may recommend an inpatient or residential program. Or, you might be able to receive MAT therapy in an intensive outpatient program.

Massachusetts officials have taken on the challenge of managing the state’s public health crisis and are battling it on several fronts. In summer 2018, Massachusetts Gov. Charlie Baker established the Medication Assisted Treatment (MAT) Commission. Some of the duties the commission is charged with overseeing are:

Massachusetts has also established a prescription monitoring program (PMP) to lower the risks of becoming addicted to opioid medications that healthcare professionals prescribe to their patients. The program tracks controlled drugs that fall into Schedules 2-5, as outlined by the U.S. Drug Enforcement Administration, and aims to hold prescribers accountable for the prescriptions they issue. According to the state’s PMP site, the program is working.

Data from the U.S. Centers for Disease Control and Prevention shows Massachusetts had among the lowest prescribing rates in the nation in 2018. That year, healthcare providers in the state wrote 35.3 opioid prescriptions for every 100 persons, which was less than the average U.S. rate of 51.4 prescriptions, the CDC said.