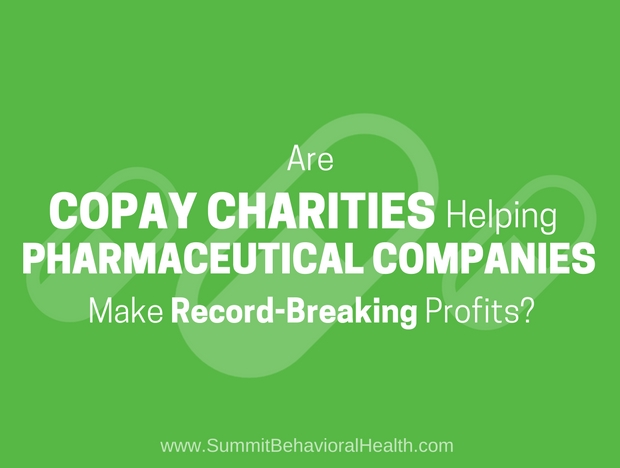 Martin Shkreli, the notorious ex-CEO of Turing Pharmaceuticals, made waves last summer when he purchased the rights to Daraprim and raised its price more than 5,000 percent. Physicians use the drug to treat toxoplasmosis, a life-threatening condition that affects those with weakened immune systems (due to HIV/AIDS, etc.).

Days after Shkreli’s purchase, he contacted Patient Services Inc., a charity committed to making medical care more affordable. Shkreli wanted to create a fund for – you guessed it – patients who suffer from toxoplasmosis.

Patient Services Inc., or PSI, jumped at the opportunity, suggesting an initial donation of $22 million, including $1.6 million of its operational costs. Shkreli countered with an offer of $1 million and $80,000 of the company’s costs. This was a paltry offer, considering that Daraprim now costs $60,000 to $90,000 for six-week treatment in light of Shkreli’s price hike.

And that isn’t the worst of it.

PSI is a copay charity, one of seven large ones in the U.S. health care system. It exists to offer payment assistance to the 40 million Americans who qualify for Medicare, helping them to a smaller copay and smaller up-front costs. Even with the help of copay charities, Medicare recipients were still paying around $3,000 for their Daraprim prescriptions.

American taxpayers shoulder the difference. This is where the controversy of “charitable giving” comes into play. By donating a paltry $1 million to a copay charity, Shkreli was able to collect millions more from Medicare, thanks to his own drug price hike. “Big pharma” benefits, while taxpayers and patients suffer.

Many pharmaceutical companies give the illusion that they participate in charity copay for altruistic reasons. Congress recently released an internal case study of Turing Pharmaceuticals, suggesting that its patient payment programs should be “repeatedly referenced” to promote public relations. Experts explain that giving millions to these copay charities makes pharmaceutical companies look altruistic, when the opposite is actually true.

The real intent of these donations is often to deflect criticism when they hike drug prices, leaving the health care system to pick up the broken pieces.

A history of deceipt

Daraprim may be the most high-profile example of this charitable funding phenomenon, but it’s certainly not the first. Retrophin, another drug company run by the now-infamous Shkreli, hiked the price on Thiola, a drug intended to treat recurring kidney stones, nearly 2,000 percent. At the same time, his company gave a donation to PSI for kidney stone patient copays.

In 2010, the drug company Valeant Pharmaceuticals International bought the rights to drugs used to treat Wilson’s disease, which makes copper accumulate in the body. A successive number of price hikes over a three-year period rose the drug’s value 2,600 percent. Meanwhile, the company donated to PSI to improve its public image.

An examination of pharmaceutical-related donations provides a better look at just how much drug prices have increased in recent years. The seven major copay charities received contributions of $1.1 billion in 2014, a two-fold increase from 2010’s tally.

Experts say for that for every $1 billion in contributions, copay charities get several billions back from Medicaid and other insurers. According to Joel Hay, professor of pharmaceutical economics at University of Southern California, these companies reap the financial benefits for their supposed “charity.” Hay has served as an expert witness in several lawsuits against insurance companies attesting to that fact.

Are copay charities complicit in these acts?

Some wonder what role copay charities like PSI play in encouraging donations from pharmaceutical companies. PSI started as a passion project by Dana Kuhn, a hemophiliac who contracted HIV in the 1980s after a blood transfusion. Kuhn later became an advocate for those with hemophilia after he saw firsthand the devastating effect that medical treatment costs had on families. In 1989, he founded PSI, and didn’t collect a salary from it for the first seven years.

Congress allowed PSI to grow in scale when legislators passed Part D of Medicare expansion in 2003, allowing coverage of prescription drugs. Drug companies can give direct help to those with private insurance, but they cannot do the same for those on Medicare, because it would be giving the government “kickbacks.”

Drug makers can, however, give money to independent charities, provided the companies don’t directly influence their funding allocation. Under Medicare expansion, PSI’s revenue grew to $128 million in 2015. Kuhn is now the highest-paid copay charity executive, posting a salary of $576,000 in 2015.

PAN, the nation’s largest copay charity, received contributions of $800 million last year, 95 percent of which came from the pharmaceutical industry, with five companies donating more than $70 million each. These numbers are easy to corroborate by looking at each company’s tax filings, which are public record.

Kuhn becomes defensive with the media when reporters ask about his salary and the donations his charity accepts from the pharmaceutical industry, particularly from Turing. He maintains that he only aims to help patients, drawing a comparison to giving lifejackets out to those aboard the Titanic. Anybody suggesting that he’s complicit in big pharma’s deceit is simply being cruel, he says.

Do patients care about the money trail?

The patients themselves can corroborate Kuhn’s position. Steve Ashbrook, a retired optician living in Cincinnati, says he would be dead without help from companies like PSI. In 2009, he began suffering from a rare and slow-growing form of leukemia. His doctor prescribed Gleevec, which initially cost $6,000 a month.

Before Ashbrook qualified for Medicare, Gleevec’s manufacturer, Novartis, gave him free medicine, a PR stunt known in the industry as a “compassionate product.” Once Ashbrook became a Medicare recipient, he turned to PSI for help. The charity paid his out-of-pocket costs, and Medicare paid for the rest.

To patients like Ashbrook, where the money comes from makes no difference. Some can survive because of copay charity help. Yet, the question remains: How can drug companies get away with egregious price increases?

‘Putting a squeeze’ on Medicare

While the American public is shouldering the tax burden for these price increases, drug companies are reaping the benefits. Last year, Pfizer posted a profit margin of a whopping 42 percent, as drug prices rise at an annual average of 10 percent. Numbers such as these prompted a team of 100 oncologists to write an impassioned letter to the journal Blood, calling the actions “profiteering.”

Distancing themselves from drug pricing

Copay charities are at a loss, trying to distance themselves from the strategies that pharmaceutical companies employ. Many of them say they’re simply trying to help patients within a system that offers little sympathy. Daniel Klein, CEO of PAN, explains that charitable organizations don’t have any influence over drug prices. They simply exist to help patients cover them, he says.

Yet, these charities must exercise caution to ensure they’re not violating anti-kickback rules established by the U.S. government. If a charity supports one drug over another and both treat the same disease, executives could face $25,000 in fines and five years in prison per violation. Civil fines can be up to an additional $50,000 per violation.

Are government agencies powerless to stop the manipulation?

The federal government has enacted regulations to ensure that these charities operate independently by requiring them to disclose details about their operations. Under the Freedom of Information Act (FOIA), they’re also required to disclose their tax filings.

However, pharmaceutical companies can also use the FOIA to sponsor funds that support their own drugs. Between 2013 and 2014, PAN had funds for 51 diseases, 41 of which we funded by a single drug company donor. Though this is not actually illegal, it illustrates how much power drug companies have over these charitable organizations.

Patient advocates maintain the government isn’t doing enough to oversee drug companies and the copay charities to which they funnel donations. The Chronic Disease Fund (CDF), which now goes by the name Good Days, is one of the seven major charity copay organizations that have come under scrutiny. In 2013, an investigative piece by Barron’s suggests the charity was creating disease funds with the express intent of helping Questcor Pharmaceuticals, one of its biggest donors. While CDF has 37 different channels for patient aid, eight point to a single drug by Questcor, called Acthar.

While Acthar does treat a range of maladies, from infantile spasms to lupus, there are alternative therapies available, making this a violation of federal regulations. In response, the Department of Health and Human Services (HHS) said it would allocate more resources to scrutinizing disease funds. It’s now the job of the Office of the Inspector General (OIG) to oversee these organizations in regards to Medicare spending.

Former employees of these copay charities suggest the OIG isn’t doing a thorough job. Caring Voice Coalition received $131 million in contributions last year, and a former executive implied that patients who needed donor drugs got help more quickly than those who didn’t need those particular medications. Yet, the OIG gave a “favorable” advisory opinion to the organization that same year.

The OIG and state prosecutors are attempting to step up oversight in response to national criticism. Gilead Sciences, Biogen and Jazz Pharmaceuticals were subpoenaed to disclose their funding of charity copay operations. U.S. attorneys for New York and Massachusetts also subpoenaed Valeant for information about its contributions.

Massachusetts is attempting to fight against the drug companies by banning the use of copay coupons available to those with private insurance. These coupons, once found all over pharmacy counters and in magazines, are no longer allowed if there’s a generic treatment available.

The poor fall through the cracks

Copay coupons, as well as copay assistance, are not available for the uninsured. Insurance companies claim they use copays to encourage patients to use less-expensive drugs, so when these are subsidized, employers and insurers bear the burden of the drug price. This, in turn, is reflected in the premiums consumers pay.

Those in the field estimate that consumers fill around 100 million prescriptions per year using copay coupons, although most of these are available in generic forms at a lower cost. An article in The New England Journal of Medicine found that nearly two-thirds of copay coupons used in 2010 were for brand-name medications that had generic counterparts. To combat these coupons, which serve to increase the market share of name-brand drugs, federal and state officials need to address the issue at a structural level.

Looking to the future

In the meantime, it seems that Shkreli is paying penance for at least some of his crimes, as he was arrested for securities fraud in 2015. In an December 2015 interview with Vanity Fair, he eschewed any sense of shame, embracing his role as a robber baron.

Regulations intending to protect Americans from pharmaceutical companies have turned into grist for the profit mill. Federal and state regulators must address the issue from the top down. According to Reuters, the U.S. House of Representatives is attempting to do just that. The House Committee on Oversight and Government Reform will continue its investigation into surging drug prices through 2016. This move is a reflection of the bipartisan appeal to control pharmaceutical prices, especially as the Medicare recipient pool grows larger thanks to the Baby Boomer generation.

Tighter regulations and increased oversight of pharmaceutical companies and copay charities will be a valuable investment. Put it this way: The amount the government spends on oversight would likely be substantially less than what taxpayers pay for Medicare prescriptions.