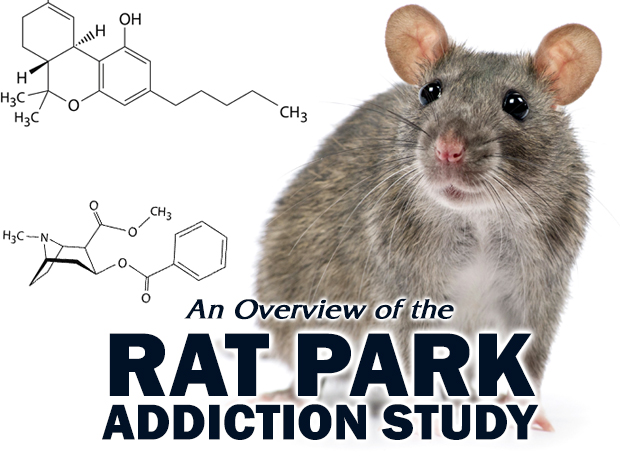 In 1978, Canadian psychologist Bruce K. Alexander conducted an experiment that would revolutionize the way we understand drug addictions. With funding from Simon Fraser University, Alexander and his colleagues built a large colony to house rats, with more than 200 times the floor space of a standard lab rat cage. This “Rat Park” experiment culminated in the leading breakthrough of the time: the underlying connection between a person’s environment and addiction.

The Rat Park Experiment aimed to prove that psychology – a person’s mental, emotional, and psychosocial states – was the greatest cause of addiction, not the drug itself. Prior to Alexander’s experiment, addiction studies using lab rats did not alter the rat’s environment. Scientists placed rats in tiny, isolated cages and starved them for hours on end. The “Skinner Boxes” the rats lived in 24/7 allowed no room for movement and no interaction with other rats.

Using the Skinner Boxes, scientists hooked rats up to various drugs using intravenous needles implanted in their jugular veins. The rats could choose to inject themselves with the drug by pushing a lever in the cage. Scientists studied drug addiction this way, using heroin, amphetamine, morphine, and cocaine. Typically, the rats would press the lever often enough to consume large doses of the drugs. The studies thus concluded that the drugs were irresistibly addicting by their specific properties.

However, rats by nature are social, industrious creatures that thrive on contact and communication with other rats. Putting a rat in solitary confinement does the same thing as to a human, it drives them insane. If prisoners in solitary confinement had the option to take mind-numbing narcotics, they likely would. The Skinner Box studies also made it incredibly easy for rats to take the drugs, and it offered no alternatives. The need for a different type of study was clear, and Alexander and his colleagues stepped up to the plate.

Details Of The Rat Park Study

The goal of Alexander’s Experiment was to prove that drugs do not cause addiction, but that a person’s living condition does. He wanted to refute other studies that connected opiate addiction in laboratory rats to addictive properties within the drug itself. Alexander constructed Rat Park with wheels and balls for play, plenty of food and mating space, and 16-20 rats of both sexes mingling with one another. He tested a variety of theories using different experiments with Rat Park to show that the rat’s environment played the largest part in whether a rat became addicted to opiates or not.

In the experiment, the social rats had the choice to drink fluids from one of two dispensers. One had plain tap water, and the other had a morphine solution. The scientists ran a variety of experiments to test the rats’ willingness to consume the morphine solution compared to rats in solitary confinement. They found that:

Based on the study, the team concluded that drugs themselves do not cause addictions. Rather, a person’s environment feeds an addiction. Feelings of isolation, loneliness, hopelessness, and lack of control based on unsatisfactory living conditions make a person dependent on substances. Under normal living conditions, people can resist drug and alcohol addiction.

At its time of publication, the Rat Park Experiment argued what was not a popular theory. Scientists had for years “proved” that substances themselves caused an addiction, an idea that anti-drug campaigns and companies took and ran with. Many experts refuted the Rat Park theory, even after subsequent studies came to the same conclusions. Simon Fraser University shut down the experiment, and for a while, it was more or less forgotten.

Today, psychologists and substance abuse experts acknowledge the fact that drug and alcohol addiction involves transmitters within the brain. Certain chemicals latch on to different receptors in the brain, altering the way users think and feel. The user becomes addicted to the high he or she experiences while on the substance, and soon has to use it all the time to cope with other feelings. The more neuroscience discovers about addictions and the brain, the more physicians can find solutions to treat addictions.

What scientists today realize is that addiction is as mental as it is physical. Humans do not have to be physically isolated, like the rats in the Skinner Boxes, to become addicted to substances. Emotional isolation is enough to produce the same affects. Humans cope with their feelings of dislocation with drugs and alcohol, finding an “escape” or a way to smother the pain. A human’s cage may be invisible, but it is no less there.

Modern rehabilitation and detoxification centers advocate the need for mind, body, and spirit healing to recover from an addiction. Rat Park provided scientists with a significant jumping-off point for research into the affects of addiction on the brain and how a person’s mental and emotional state feeds an addiction. Today, addiction and treatment experts widely recognize the main conclusion of the Rat Park studies: addiction is largely psychological.

Alexander, et al.’s Rat Park Experiment and similar studies contribute greatly to our current understanding of addiction and recovery. These experiments lead top treatment experts to advocate the need for a comprehensive recovery experience that addresses the mental and emotional needs of recovering addicts, not just their physical needs.

For your best chance at beating an addiction, you need an environmental change. A holistic approach to detox addresses a person’s mental, emotional, social, and spiritual needs, as well as his or her medical/physical needs during substance withdrawal and recovery.

For More On Holistic Therapy And Treatment, Click The Link Below.