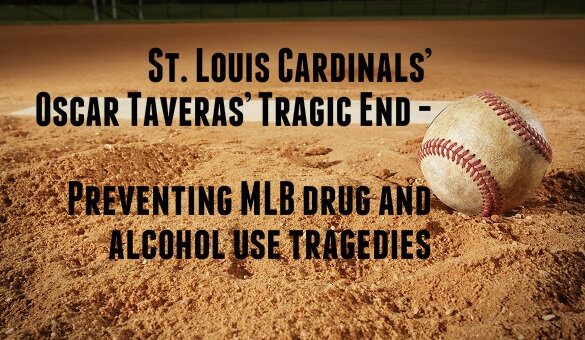 In October 2014, Oscar Taveras was driving through a tourist town in the Dominican Republic with his girlfriend, when his vehicle skidded off the road. Initial reports stated that wet roads had caused him to lose control of his Camaro and hit a tree head-on. However, on November 11, 2014, it was confirmed that Taveras had a blood alcohol level that was five times the legal limit.

What Can Be Done To Prevent MLB Drug And Alcohol Use Tragedies?

His death has brought to light many issues of drug and alcohol abuse in the MLB and what can be done to prevent these tragedies from occurring.

Newfound fame can often lead to alcohol and drug addiction, especially in younger people. In the case of Oscar Taveras, he was only 22 years old at the time of his death. He had risen through the ranks of the minor leagues to take the Cardinals into the playoffs in the 2014 season.

Upon returning to his home country of the Dominican Republic, he was likely greeted as any celebrity would be. To prevent this fame from going to a young player’s head, a strong mentor program should be in place. Experienced players could take in new players under their wing and show them the ropes of enjoying the fame without letting it go to their head.

In many cases, the team managers are busy making rosters and developing strategies for upcoming games. Players who are able to hide addiction may slip through the cracks. By being more vigilant in observing potential problems such as excessive partying or other players’ statements can ultimately prevent another tragedy caused by drugs and alcohol.

Identifying addiction and substance abuse early can help the player get the treatment they need before they become injured or killed due to their substance usage.

Many athletes who find themselves struggling with substance abuse and addiction may fear the judgment they will receive by admitting to their condition. At Summit Behavioral Health, we help patients learn ways to overcome and control their addictions in a private, secure, and luxurious setting. This allows athletes to recovery from their addiction without the negative publicity they fear.

Whether your an athlete or not, you’ve come to the right place. Let us help you take that first step to recovery. We promise, it is worth it.