Fentanyl is one of the most dangerous drugs used for medical and recreational purposes in the United States. It’s a powerful opioid used to treat pain quickly, but it can also be a deadly illicit drug found all over the illicit drug market. Recreational drug users take drugs in various ways, including intravenous injection, snorting, swallowing, and smoking. But what happens if you smoke fentanyl? Can you overdose from smoking fentanyl? Is snorting fentanyl more dangerous? Learn more about the dangers of snorting and smoking fentanyl.

The Scope of Fentanyl Use

As we navigate our way through these challenging times, we’re looking for a way to resolve the national opioid crisis. While we had seen modest progress in terms of overdoses from year to year, the coronavirus pandemic accelerated overdose deaths during COVID-19. Our country took a significant backslide when it came to treating the crisis.

The U.S. Centers for Disease Control and Prevention (CDC) notes that 81,000 drug overdose deaths occurred in the United States in 2020, which was the highest number of overdose deaths ever recorded in a 12-month span. Although authorities placed stricter requirements to get prescription opioids, fentanyl use ramped up dramatically.

CDC Director Robert Redfield, M.D., has noted how the pandemic’s disruption of life hit those with substance use disorders (SUDs) the hardest. As we battle to end the pandemic, we can’t lose sight of how specific groups like addicts are being affected. It’s vital to take care of those suffering from unintended consequences. While we attempt to overcome this, we need to find ways to battle drugs like fentanyl, which have overwhelmed the system and caused even more heartache during a challenging period.

Fentanyl, a synthetic opioid, is the main driver behind the increase in overdose deaths. The figures increased a staggering 38.4 percent in a 12-month period from June 2019 to May 2020. During this span, 37 of the 38 U.S. jurisdictions reporting on synthetic opioid data showed significant increases in opioid-related overdose deaths. The data also found 18 of these jurisdictions showed increases greater than 50 percent. Ten western states reported a 98 percent increase in fentanyl-related deaths.

The increase in these overdose deaths is concerning, and when someone snorts or smokes a drug like fentanyl, they put themselves at an elevated risk of losing their life. If you’ve heard about someone you love using fentanyl, or you want to learn more about the dangers of smoking and to snort it, we’ll explain below about the dangers, overdose risk, and what you can do to help. 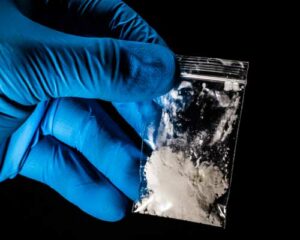 While most of us are familiar with the illicit form of fentanyl, sometimes we forget that it’s a legal prescription opioid used to treat pain. The drug has two primary uses. It is used to treat significant acute, postoperative pain after surgery. It is also used to treat chronic or breakthrough pain in those who have developed a tolerance of other opioids, such as oxycodone or hydromorphone.

Similar to morphine and other prescription pain relievers, fentanyl is an opioid used to reduce a person’s perception of pain by acting on opioid receptors throughout the brain and body. The drug is considered one of the most potent opioid medications ever created, which is why it’s reserved for individuals who have become opioid-tolerant. Doctors will administer this drug when nothing else works because it’s 100 times more potent than morphine.

Although the use of the drug has been standard in hospital and pain management settings, we’ve witnessed an influx of the illicit form made in clandestine pop-up labs in recent years. It has become a significant health concern throughout the United States and surged in popularity because of its potent high and low cost. As it soared in popularity, the number of overdoses that fentanyl-laced drugs have caused has also reached new heights. The drug became highly sought out among users, who refer to it as “china girl,” “apache,” and “china white.”

Fentanyl from a pain management facility is typically administered as a patch that you place on your body, but illicitly produced fentanyl typically comes in a powder that can be smoked, snorted, or injected. Due to lack of regulation, it’s extremely dangerous to use the powder because you never know what’s in it. However, misusing any fentanyl product, legal or illegal, by changing the frequency, dose, or route of administration can also be dangerous because of its potency and side effects. Snorting fentanyl is hazardous because of its quick onset.

Why Would Someone Smoke or Snort Fentanyl?

Fentanyl is an extremely potent opioid, but it may be used for various reasons. Unfortunately, many people take fentanyl without knowing it. Because the drug is so potent, a tiny amount is an effective dose for people who would buy it for recreational use. Drug dealers can sell more doses of fentanyl than other opioids like heroin. Plus, profitable packages of fentanyl are much smaller than the equivalent amount of heroin. So, fentanyl can be shipped in small, difficult-to-detect containers. For the illicit drug trade, fentanyl is cheaper and easier to make and ship than other options.

It’s also extremely powerful. A small amount can be added to other substances with intense results. Heroin is often mixed with cheap, inert substances to stretch profits. But that can make weak, low-quality heroin. Adding fentanyl to the mix can increase the drug’s perceived quality, making buyers and users believe it’s closer to pure. Many opioid users think they are taking heroin, but they are actually taking a mix of heroin and fentanyl.

But fentanyl isn’t only mixed with heroin. It can be pressed into pills that can be made to look like prescription drugs like Xanax. It may also be added to stimulants like meth to create a unique high. The drug may show up in commonly snorted or smoked substances that aren’t usually associated with opioids.

While many people likely use fentanyl by accident, some may seek it out for its potency as a euphoric drug. It is powerful enough to be deadly in tiny doses, but if you can take a small enough amount, it can deliver a potent high.

Smoking and snorting fentanyl, even intentionally, may be done for various reasons. Intravenous injection is the most potent and efficient means of administration, but it’s also invasive and dangerous.

How Dangerous Is Snorting Fentanyl?

Snorting fentanyl is extremely dangerous and poses many risks to the individual using it. As mentioned above, non-pharmaceutical fentanyl comes in powder form, making it easy for someone to snort it. Even a person prescribed fentanyl must carefully monitor their use. Any time substances are consumed in ways other than they’re prescribed, problems can arise. Snorting fentanyl is dangerous because of the following:

Snorting can be inherently unpleasant, causing irritation and even pain. But the speed of onset is one of the most significant reasons someone might snort a drug. Your nose is filled with delicate tissue and blood vessels. The reasons your nasal passages can be easily irritated are the same reasons snorting is an effective means of administration.

When you snort a drug like fentanyl, the opioid is absorbed into the bloodstream through your mucus membranes in the nasal passage. It then reaches the brain a short time later, which is much faster than oral ingestion. For this reason, an overdose can occur more frequently.

When you snort a drug, you may be delivering the dose more quickly. Fentanyl is a relatively fast-acting opioid, but snorting it may be a faster means of administration than transdermal patches, pills, or lozenges. Plus, fentanyl has a high intranasal bioavailability of 89%. In other words, when fentanyl is snorted, 89% of it makes it to the bloodstream.

The intensity of the high when snorting fentanyl is also much higher when compared to oral ingestion. A quicker route means the concentration of the drug in the brain rises rapidly, leading to intense and potentially deadly effects. It can overwhelm your body and cause respiratory depression. If you have no tolerance to opioids, such as if you purchase a drug laced with fentanyl where you didn’t expect an opioid to be present, the outcome can be catastrophic. Snorting fentanyl also allows for more of the drug to reach your brain compared to oral ingestion. When consumed orally, fentanyl is broken down by your stomach, intestines, and liver before it reaches the brain.

Snorting a psychoactive substance tends to deliver it into the brain more quickly, but it can also cause it to wear off more quickly. When fentanyl is taken intravenously, it can last between 30 and 60 minutes and begin working within a minute. When it’s snorted, it may actually take a few extra minutes to start working. However, if a recreational drug user is looking to administer fentanyl, snorting may be faster than swallowing or inhaling it.

When a substance like fentanyl reaches your body fast, it can produce intense effects. However, these are typically more short-lived than when you ingest the drug orally.

Side Effects of Snorting Fentanyl

No matter how the drug is consumed, you run the risk of side effects. When using the drug as prescribed, you are bound to experience some side effects as well, but the risk rises when abusing it. If you snort fentanyl, you’ll likely experience the following:

How Dangerous Is Smoking Fentanyl?

Similar to snorting, when you smoke fentanyl, the effects come on much faster than other means of using the drug. It’s possible for the euphoria to come on in as little as 10 minutes. However, the difference between smoking and snorting the drug is how long it lasts. While the duration of the high when snorting the drug is short, it’s extremely intense. When smoking fentanyl, it’s intense and lasts longer than snorting.

No matter how you abuse fentanyl, it’s dangerous. However, smoking it can increase your odds of becoming addicted. It’s typically smoked by placing it on foil and can lead to lung problems and deadly overdose. The most common side effects of smoking fentanyl include:

Long-term effects can be severe, including constipation, insomnia, and mental health disorders, such as depression or antisocial personality disorder. Chronic fentanyl smoking could also lead to hormonal imbalances that lead to sexual dysfunction in men and irregular menstrual cycles in women.

Smoking fentanyl can take a huge toll on your lungs. As an opioid, it blocks air from making its way into the lungs and may lead to respiratory depression. Respiratory depression slows breathing and can cause life-threatening breathing issues. When you pair this with poor health and abuse, depressed respiration can lead to severe lung complications, including tuberculosis and pneumonia.

Those who regularly smoke the drug can develop a chronic cough, especially if it’s laced with tobacco. Those with asthma who smoke fentanyl can also experience worsened asthma symptoms. It can also cause asthma in those who previously did not have the condition.

The only way to avoid these complications is to seek treatment for your fentanyl addiction. As we’ve shown, smoking and snorting the drug is dangerous. Not only can it cause a fatal overdose, but it can also lead to other chronic issues that stick with you when you stop. Seeking help and stopping the drug is the best way to save yourself from problems in the future.