Cocaine and Alcohol: What Are The Dangers of Mixing Them?

Alcohol is likely the most frequently used recreational substance in the world. In the United States, most people drink alcohol at least once, and millions of people engage in binge and heavy drinking. Meanwhile, cocaine is among the most commonly used illicit drugs in the country. According to the 2020 National Survey on Drug Use and Health (NSDUH), more than 5.2 million people used cocaine that year.

Some people who use cocaine drink alcohol and vice versa, but what happens if they mix the substances together? Alcohol and cocaine are often used in the same settings, but when they are combined, they have potentially damaging effects on your body. What makes these substances dangerous to mix? Learn more about the dangers of mixing alcohol and cocaine.

Cocaine is a stimulant drug that was once used for medical purposes in the United States. Medical use is rare today, but it may be used as an anesthetic or numbing agent in some settings. It’s more commonly used as a recreational drug that creates a euphoric, stimulating high in its users. Cocaine’s fast-acting stimulating effects can cause intense happiness, agitation, a sense of empowerment, increased energy, increased heart rate, sweating, and dilated pupils. High doses of cocaine can raise your blood pressure and body temperature.

Cocaine works with dopamine, an important chemical in the brain that’s responsible for reward and motivation. Stimulants often work by increasing dopamine levels. Cocaine specifically works by stopping a process called reuptake, which removes excessive dopamine from your synapse so that it can bind to dopamine receptors. Blocking dopamine reuptake increases the levels of the chemical in your brain, causing it to bind to more receptors and increasing its effects on your central nervous system.

The drug also increases the levels of serotonin and norepinephrine in the same way. Serotonin is tied to positive emotions, and norepinephrine is involved in managing blood pressure and heart rate. Altogether, the increase of these natural brain chemicals can have a profound impact on your physical and psychological state.

Cocaine’s effects on dopamine contribute to its potential as an addictive substance. Addiction is a disease that primarily affects the brain’s reward center. Cocaine causes potent reward effects that your brain learns to crave like it would crave life-sustaining activities, like eating a good meal. Recreational cocaine use can significantly increase your risk of a substance use disorder (SUD).

How Does Alcohol Affect the Brain?

Alcohol is a central nervous system depressant, which does the opposite of a stimulant. Instead of increasing activity in the body, it slows it down. Drinking alcohol is actually a chemical called ethanol that works with a natural chemical in your brain called gamma-Aminobutyric acid (GABA). GABA is responsible for rest and relaxation helps facilitate sleep.

Alcohol works by binding to GABA receptors to increase the chemical’s effectiveness. When you drink, alcohol increases GABA’s sedating and nervous system depressing effects. Like cocaine, alcohol also works to increase dopamine levels, which contributes to the euphoric intoxication you may experience while drinking. Alcohol’s effects may also contribute to its addictive potential. Consistent excessive drinking can lead to an alcohol use disorder, which can involve chemical dependence and addiction.

What Happens If You Mix Cocaine with Alcohol?

Mixing any psychoactive drugs can be potentially dangerous. Even mixing over-the-counter substances should be done with caution and 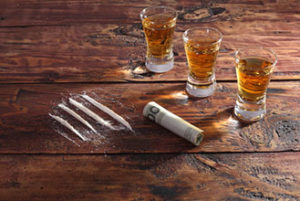 under a doctor or pharmacist’s guidance. However, mixing cocaine and alcohol comes with significant risks that should be avoided. Cocaine and alcohol are chemical opposites in many ways. Since one is a depressant and the other is a stimulant, they can have opposing effects on the brain. However, those opposing effects don’t cancel each other out. In fact, they work together when it comes to increasing the brain’s dopamine levels.

Alcohol is also unique as a depressant, partly because of its effects on dopamine. Although it will ultimately slow down your nervous system, it may have exciting effects while your blood-alcohol concentration (BAC) level is rising. Many people experience excitement and increased energy while they are drinking and elevating their BAC levels. However, they also begin to feel alcohol’s depressant effects when their BAC levels begin to fall.

If you mix alcohol and cocaine, it may feel like they are intensifying one another at first. Alcohol increases dopamine release, and cocaine prevents it from being removed. However, when alcohol starts to affect the GABA receptors, the stimulating effects may be slightly dulled. Still, cocaine is a potent stimulant, and you will still feel its effects.

Is Mixing Alcohol and Cocaine Dangerous?

Mixing alcohol and cocaine can be dangerous and even life-threatening. While the two substances don’t potentiate each other like alcohol and other depressants might, mixing them can increase your risk of an overdose. Alcohol and cocaine’s opposing natures may mask some of their effects. For instance, drinking alcohol while taking cocaine may decrease the intensity of your energy increase.

Cocaine can also mask alcohol’s intoxicating effects, and you may feel less tired or sedated after heavy drinking. The danger of this is that it may cause you to feel like you can take more cocaine or drink more alcohol than you normally would. It may be hard to gauge when you’ve had enough. Because the two substances counteract one another, you may be more likely to overdose on one or both of the drugs.

The deadly mixture of depressants and stimulants is often seen with cocaine and heroin. While opioids like heroin aren’t central nervous system depressants, they cause depressant-like qualities. Mixing cocaine and heroin is commonly referred to as a speedball, and it can be extremely dangerous. In fact, speedballing has been associated with several high-profile overdoses, including the John Belushi, River Phoenix, and Chris Farley.

Why Would People Mix Cocaine and Alcohol?

Alcohol is commonly mixed with other recreational substances, including cocaine. A person might mix alcohol and cocaine for several reasons, despite it being dangerous to do so. In some cases, they could mix the drugs accidentally. Alcohol and cocaine may both be present in party settings, so it’s possible to mix the two, not realizing the risks. A person may decide to use cocaine after they have already been drinking.

Cocaine and alcohol may also be mixed intentionally to intensify a person’s recreational experience. Since both substances can interact with dopamine, mixing them can create a more intense euphoric high, even though it can be dangerous.

Finally, drinking while taking cocaine may be done with the intention of masking cocaine’s side effects. Cocaine can cause a sense of empowerment, excitement, and increased energy, but it can also cause anxiety, paranoia, and even panic attacks. Alcohol’s depressant qualities may be taken to smooth out some of cocaine’s rough edges. Other depressants may also be targeted for the same reason, including benzodiazepines, barbiturates, sleep aids, and opioids. Of course, masking effects are exactly what makes mixing the drugs dangerous.

The Effects of Mixing Alcohol and Cocaine on the Body

Mixing alcohol and cocaine is also dangerous because they can damage some of the same parts of your body in high doses. High doses of alcohol or cocaine can have a damaging effect on the liver. Alcohol is processed in the liver, and heavy drinking can put some extra strain on your liver. High doses of cocaine can cause acute liver toxicity. Alcohol can also affect your heart rate and blood pressure, while high doses of cocaine put extra strain on your heart, which can lead to a heart attack.

Mixing the two can also have long-term consequences, especially if you use both chronically. Alcoholism can lead to liver disease, heart disease, and certain types of cancer. Chronic cocaine use can damage your heart and liver and increase your risk of stroke and neurological problems.

What Else Is Dangerous When It’s Mixed With Alcohol?

Alcohol can be dangerous when mixed with many other recreational drugs. It should also be avoided when you’re taking prescription drugs that are processed in the liver since they could combine to put extra strain on the organ. Prescription depressants like benzodiazepines and non-benzodiazepine sleep aids can potentiate with alcohol. That means their similar effects can combine to cause an intense reaction in your body. Mixing them could lead to loss of consciousness and respiratory depression. Opioids aren’t depressants, but they can also increase your risk of deadly respiratory depression when mixed with alcohol.

If you’re unsure if a prescription drug is safe to use with alcohol, it’s always best to have a conversation with your doctor or pharmacist first.

Is Any Amount Safe?

Mixing alcohol with other substances can be dangerous, especially when illicit drugs are involved. It’s true that small amounts of both substances may not lead to dangerous side effects, but it may be difficult to gauge what is too much while you are intoxicated. Illicit cocaine may be unpredictable, even when used on its own. It could contain cocaine with high purity, adulterated cocaine, or other dangerous substances like the extremely potent opioid fentanyl. For that reason, a safe amount may be possible but hard to achieve when an illicit drug is involved.