Snorting or Smoking Ecstasy: Is It More Dangerous Than Pills?

Ecstasy is a type of synthetic drug that is sometimes called the “love drug.” Upon using ecstasy, people experience euphoria and a change in their perception.

Traditionally, this drug is administered in the form of a pill, but in recent years, more people are snorting or smoking it to achieve a high.

Learn more about these administration methods and the particular dangers associated with them.

From a chemical perspective, ecstasy is similar to both mescaline and amphetamines. The age group that uses this drug most often are people between the ages of 18 and 25. In fact, about 13 percent of people in this demographic admit to using ecstasy at least once, according to a report published by the Substance Abuse and Mental Health Services Administration.

This drug is MDMA, but it is often mixed with other substances that alter the mind, such as ephedrine, ketamine, caffeine, cocaine, bath salts, cough medicine, and selegiline, according to the National Institute on Drug Abuse (NIDA). These substances can increase the danger of ecstasy, especially since there is no way to know what is in it or how much of the other substances are present.

The effects of ecstasy start about 20 minutes to 40 minutes after taking the drug. The peak effects occur about 60 minutes to 90 minutes after ingestion. The effects last for about six hours. For about two days after using ecstasy, it is possible to feel fatigued and drained. This is due to losing significant serotonin and because the drug has a severe impact on the body, according to the Center for Substance Abuse Research.

No matter which administration method someone uses, this drug has a direct impact on serotonin levels. The brain floods itself with this neurotransmitter when someone takes ecstasy. This results in a highly empathetic and emotional state. People also tend to experience heightened sensitivity.

When the supply of serotonin in the brain becomes depleted, the effects of the drug wear off. A common consequence of this is depression. Over time, damage to important memory and thought functions is possible. It is also possible that the neurons that produce serotonin and dopamine transmitters may generate as a result of ecstasy use, according to the Center for Substance Abuse Research. In some cases, this damage could be a long-term problem.

Ecstasy use comes with many risks. One of the biggest is that there is no way to know exactly what a person is consuming. Secondly, MDMA increases the risk of heat stroke due to it being a type of serotonergic drug, according to NIDA. These types of drugs affect the hypothalamus. This is an area of the brain that is responsible for body temperature regulation.

Hyponatremia is another acute risk. This is a condition where the levels of sodium in the body drop too low. When someone is taking ecstasy, they are often very thirsty, causing them to consume a lot of water. MDMA also encourages water retention, according to information published in Advances in Pharmacological Sciences.

All of these effects are largely associated with consuming ecstasy pills. It is important to take a look at how smoking or snorting ecstasy could affect the body, or if the effects are the same.

Smoking ecstasy is not a common practice, but some people do use the drug this way. It is unknown if smoking ecstasy straight is more dangerous than ingesting it orally or snorting it. Because it would be a powder, someone would likely need to mix the ecstasy with tobacco or marijuana to smoke it. 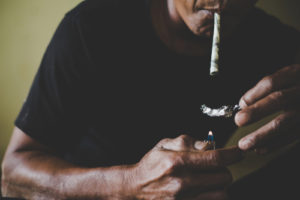 Some people say the onset of the effects is faster when someone smokes ecstasy compared to the oral route.  However, this information is largely anecdotal.

Vaping ecstasy is becoming increasingly popular. In fact, some people are adapting their e-cigarettes to use them with crack cocaine, heroin, and ecstasy, according to an article published by The Sun. Since this is a relatively new trend, it is unknown what the long-term effects will be.

When someone uses vaping to smoke ecstasy, the drug bypasses their digestive system and is quickly absorbed by the lungs to get into the bloodstream. When using ecstasy in this way, the drug will start to affect the brain in about five seconds. This can reduce the average of 20 minutes to 40 minutes that it takes oral ecstasy to start causing effects.

Snorting ecstasy is not an uncommon way to take the drug. It is estimated that about 10.3 percent of ecstasy users snort the drug, according to the Global Drug Survey.

Snorting ecstasy usually causes the effects of the drug to occur faster compared to taking the drug orally. The peak of the drug might also be more intense when someone snorts ecstasy compared to the oral administration route.

The nasal membrane allows the bloodstream to more readily absorb the drug due to how porous it is. This increases how fast the drug starts to take effect in the body. Since snorting it makes it possible for some of the ecstasy to avoid liver breakdown, this results in more of the drug getting into the body.

Due to the more rapid effects and more intense peak, snorting this drug could potentially increase the risk of overdose. Snorting the drug can also reduce the duration of the effects, causing people to take more doses to maintain their high.

Snorting any type of powders is bad for the nose. Snorting ecstasy in a powder form could lead to lung infection, nasal lining inflammation, nasal airway blockages, and respiratory tract blockages. This is due to the different chemicals that make up the powder particles.

The damage caused by snorting powders can become permanent. Since the nose is responsible for essentially filtering the air before it goes into the lungs, the damage associated with snorting powder could allow unclean air into the lungs. This could increase someone’s risk of infection and other acute and chronic lung issues.