Do Some People Really Have Addictive Personalities?

Anecdotally, these people may be described as having an addictive personality. It’s commonly thought that they might be more likely to develop a serious addiction if they tried significantly addictive drugs. But do these assumptions have any basis in reality? Do some people have addictive personalities that make them more inclined to struggle with the disease of addiction?

Addiction is a complicated problem with a variety of potential causes and consequences. The best way to stop addiction is to avoid it entirely. If some people are more inclined toward addiction, it may be helpful to know that before you encounter addictive substances. Learn more about addiction, what causes it, and how you can treat or avoid it.

How Is Addiction Defined?

Addiction is often equated with developing a bad habit. But there’s more to addiction than a learned pattern of behavior. For instance, you may get used to a particular route to work that you take every day. One day, that route may be blocked by an accident or roadwork, forcing you to take another route. It may be inconvenient or even uncomfortable to have to break your routine, but it doesn’t mean you’re addicted to your normal commuting habits.

Addiction is defined by the American Society of Addiction Medicine (ASAM) as a chronic disease that affects the reward center of the brain, motivation, memory, and other related circuitry.

ASAM also says, “Addiction is characterized by [the] inability to consistently abstain, impairment in behavioral control, craving, diminished recognition of significant problems with one’s behaviors and interpersonal relationships, and a dysfunctional emotional response.”

Addiction is often identified by compulsive use of a drug or alcohol despite serious consequences that come as a direct result of drug use. For instance, if a person’s drinking leads them into legal trouble like a DUI and they still drink excessively, they may have a severe alcohol use disorder.

Addiction is also a progressive disease that can be difficult to overcome on your own. In many cases, if it’s left untreated, addiction can start to take over multiple aspects of your life including your health, relationships, finances, and legal standing.

But is addiction a mental disorder or a biological problem?

In many ways, it’s both. In the early days of addiction treatment, clinicians made the mistake of assuming that addiction was a moral failing or a bad habit. It was often treated with punishment, incarceration, and sometimes it was merely treated as a physical problem. The rich were checked into hospitals to go through detox, and the poor were sent to jail or asylums to sober up or “dry up.” However, addiction causes physical and psychological changes to your brain and body.

If a drug is chemically addictive like alcohol, heroin, or cocaine, repeated use will cause your brain chemistry to adapt to the foreign chemical. Physical changes in the way your brain communicates will make it difficult, uncomfortable, and even dangerous to quit using. When you stop, you’ll experience withdrawal symptoms, and in some cases, like with alcohol or benzodiazepines, you may experience life-threatening symptoms that need medical attention. Usually, dependency can be reversed within 10 days of detox.

Addiction, or a severe substance use disorder, can take much longer to address. Addictive drugs often interact with or mimic specific chemicals like endorphins, serotonin, 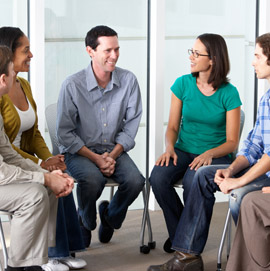 As a complex disease, addiction may have a wide variety of potential causes, and it could lead to a host of consequences. It’s difficult to pinpoint one particular trigger point for substance abuse disorders.

When you first enter treatment, you may go through an interview with your therapist that’s called a biopsychosocial assessment. It’s designed to help the therapist get a complete picture of your medical, psychological, and social history and needs. The assessment is designed to help you and your therapist make a treatment plan that’s tailored to your specific needs. But even after that kind of process, it still may be unclear what caused your addiction in the first place.

According to the National Institute on Drug Abuse (NIDA), it’s more likely that addiction is caused by several factors working together rather than one specific cause. Researchers have pointed out three specific risk factors that may influence your likelihood of developing an addiction: Biology, environment, and development.

Studies have shown that a person’s genes may have a significant influence on their risk of addiction. If you have a family history of addiction, it’s possible that you may also be predisposed to it. Through twin studies, researchers have found that family and social factors are significant in early adolescents when it comes to exposure to nicotine, alcohol, and other drugs. However, in young and middle adulthood, genetic factors become more significant.

Development of addiction combines both genetics and environment. Studies show that early exposure to drugs or alcohol makes addiction more likely to occur later in life. Addiction can happen to people at any age, but it seems that early drug use has a profound impact on a person’s perception of the risks of abusing psychoactive substances. Also, the existence of co-occurring problems may lead to a substance abuse disorder. For instance, a traumatic event can lead to anxiety or post-traumatic stress disorder (PTSD), which can lead to self-medication with alcohol.

What About Addictive Personalities?

In some cases, they do, but like everyone else, people who are in or recovering from addiction are unique. There is no evidence to suggest that specific personality traits lead to addiction. Mental health problems, your upbringing, and genetic factors can all play a role, but your personality doesn’t necessarily lead to substance abuse problems.

If you or someone you love is struggling with a substance use disorder, it’s important to seek help as soon as possible. If you would like to learn more about addiction and how treatment might be able to help you, there is help available to provide you with information as to what you can do next.

Speak to an addiction treatment specialist at Serenity at Summit to learn more about the therapy options that may lead you into a lasting recovery. Call 844-432-0416 or connect with us online to take the first steps toward freedom from active addiction. Call anytime.