Guide to Getting Addiction Treatment through the VA

Young veterans regularly observe that the military does an extremely useful job of training them to operate within the military and an abysmal job of reversing that training or preparing them before they are sent back into civilian life. In 2016, there were 20.4 million United States veterans, which represent less than 10 percent of the total United States adult population. Other statistics show that 550 servicemen leave the military each day.

The statistics paint a picture of the sheer volume of veterans that represent our country, and that the military is not doing its job in protecting them once they leave. Veterans returning from combat face a slew of challenges as they attempt to acclimate back into their civilian lives.

Unfortunately, many of them deal with this process by numbing the pain or blocking post-traumatic stress disorder symptoms with drugs. It highlights the urgency we must have for getting our veterans treatment through the United States Department of Veteran Affairs (VA).

Post-traumatic stress disorder is one of the most significant problems plaguing veterans when they return from active duty. Substance use disorders are associated with medical issues, psychiatric disorders including depression or anxiety, interpersonal and vocational impairment, and increased rates of suicidal ideation and attempts. Military personnel released a study and found 30 percent of completed suicides were preceded by alcohol or drug use, and an estimated 20 percent of high-risk behavior deaths were attributed to alcohol or drug overdose.

The families of veterans will fight many battles of their own. It is common to go months or even years without seeing their loved one, not knowing if their spouse, child, or parent will ever make it home. For those who do make it back, the horrors of war are seldom left on the battlefield. The effects of PTSD, traumatic brain injuries and combat-related substance abuse can unravel even the tightest knit of families. The following guide will answer some of the most common questions families may have when their military family member is struggling with an addiction to drugs or alcohol.

Heavy drinking has long been a custom in military culture, but the most recent deployments to Iraq and Afghanistan have seen a spike in reported rates of consumption of controlled substances. An article released by JAMA shows that a study of veterans who had been deployed recently and experienced combat showed that 53 percent of these veterans engaged in binge drinking.

Soldiers who dealt with life-threatening situations where their lives were on the line, were strongly associated with a positive alcohol abuse screening. Of the 1,120 soldiers that had been deployed, 25 percent tested positive for dangerous levels of alcohol consumption, and 12 percent showed behavioral problems related to their alcohol consumption. These numbers provide a direct correlation between how post-traumatic stress disorder and substance abuse play hand in hand with one another.

Post-traumatic stress disorder in our veteran community is a growing epidemic. It can develop after a terrifying ordeal that involves physical harm, or the threat of bodily harm to the veteran or someone else. However, you don’t need to be harmed to develop PTSD, but it is possible to develop the disorder after witnessing friends, family members, or someone in your envoy being injured or threatened.

It is war veterans that have brought PTSD into the spotlight, but PTSD can also stem from traumatic events such as muggings, rape, torture, kidnappings, being held captive, child abuse, car accidents, train wrecks, or natural disasters. Today, hundreds of thousands of service men and women and recent military veterans who have seen combat may experience the disorder.

The U.S. Department Of Veterans Affairs Estimates That PTSD Afflicts:

PTSD and substance abuse almost go hand in hand, like peanut butter and jelly, and these conditions make it ripe for developing a substance use disorder. As time progresses using drugs or alcohol, it replaces average and healthy methods of coping with the stress and nerves of post-traumatic stress disorder. While many veterans will turn to controlled substances as a way to protect themselves against the emotional and physical toll of PTSD, the chemical effects of the drugs will eventually turn the veteran to rely on the substances consistently.

The veteran will abandon other methods of coping with the stresses of life such as family time or participating in hobbies. The emotional numbness they experience will make them isolate from what they once knew and love. Substance abuse causes its own set of problems, but the veteran will only find comfort in the abuse of drugs or alcohol.

How Can a Veteran Help Themselves?

The VA suggest the following: 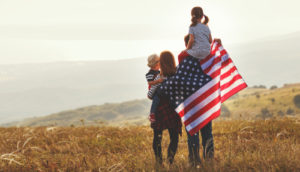 “Develop a support network by getting in touch with other veterans and survivors of trauma, people who understand what PTSD entails, and people who can help protect against feelings of isolation and loneliness. Knowing that there’s someone out there, who speaks your language and knows your pain, can make all the difference in the world. Building such relationships can also help restore trust with other people (known and unknown alike), which is a key component in the treatment of post-traumatic stress disorder.”

Many of these veterans find it difficult to cut back or abstain from using substances on their own. Effective treatments for substance use problems are available at the VA, and possible therapies address all issues related to substance use. The VA provides effective, scientifically proven services for all eligible veterans, no matter where they come from.

There are various options for those seeking treatment for substance use problems. These options include therapy, either alone or with a therapist in a group, as well as medications to help veterans reduce their use of alcohol tobacco, and drugs.

Some treatments that don’t involve medication involve one or more of the following:

A patient coming to the VA can expect to find the following types of care:

Sometimes, individuals will need to go through several types of treatment centers to find the one that is tailored specifically to their needs. Perhaps a veteran’s experience at the VA was not ideal, and they need a more customized approach. Fortunately, Serenity at Summit can be that next level of tailored care.

Let Serenity At Summit Be Your Next Step

If you are a veteran and need additional help that the VA cannot offer, it is imperative that you receive the treatment you need to not become a statistic. Addiction is a disease that can make someone lose everything, but fortunately, Serenity at Summit can help. Our staff at Serenity is equipped to deal with veterans of all ages and backgrounds.

If you are struggling with addiction and need treatment, look no further. Our addiction specialists at Serenity at Summit are ready to listen to your story unique story today. Feel free to give us a call 855-956-4940 or contact us online to learn more about how we can help.