Can You Smoke or Snort Xanax?

When you’re given a drug from a doctor, it’s common for you to assume it’s safe. While physicians will prescribe medication in a safe dosage used to treat a specific condition, exceeding that dosage is when you start crossing the line from effective to potentially dangerous. Benzodiazepine drugs are extremely prevalent in our society. According to NewScientist, benzodiazepine drugs are prescribed at about 66 million doctors’ appointments each year in the United States, equating to every 100 adults who visit an office-based doctor, 27 visits will result in a benzo prescription.  This isn’t a small sum – these drugs have a broad reach. In contrast, a vast majority of those who take benzos like Xanax to achieve calm won’t abuse them; many will.

Some experts have sounded the alarm about benzodiazepine use and how it could turn into the next crisis, similar to what we’re experiencing with opioids. These figures are discouraging and disappointing, and everyone should be concerned about getting them down. Benzo drugs like Xanax, albeit effective, have been at the forefront of this issue. Xanax is used to treat anxiety disorders, which are real and severe medical conditions like diabetes or heart disease. Anxiety is the most common and pervasive mental disorder in the United States.

Anxiety, which Xanax is prescribed to treat, affects an estimated 40 million people in the United States in any given year, translating to 18 percent of the population. An estimated eight percent of children and teenagers will also experience an anxiety disorder, with their symptoms developing before they turn 21. After hearing these figures, it’s understandable as to why so many doctor’s appointments result in a prescription for benzodiazepines.

Again, for most, they won’t use the medication in a way that’s considered abuse. However, some who develop tolerance and seek to get high from it might opt to snort or smoke Xanax. By using a drug any other way than it’s prescribed is considered abuse, but does that mean it’s dangerous?

Below we’ll discuss the dangers of smoking and snorting Xanax and how the drug has become widespread to the point of causing a potential crisis in the United States.

Xanax, also known as alprazolam, belongs to a group of drugs in the benzodiazepine class. The drug is used mostly to treat anxiety but can also be used for seizures or severe insomnia. It belongs to the same class of drugs as Valium, Ativan, Klonopin, Dalmane, and others. The drug works by decreasing abnormal excitement in the brain caused by an overactive nervous system. It helps stimulate gamma-aminobutyric acid (GABA) in those who have trouble producing it on their own. It creates a calming effect, which helps relieve anxiety or put someone to sleep fast.

How Dangerous is Snorting Xanax?

It’s important to note that snorting any drug is dangerous. Our bodies weren’t designed to take anything in our nose, which serves as an “air cleaner.” Taking any medication is bad for our system, but when it’s regulated and taken in moderation, it reduces the risks. Those who snort drugs like Xanax do so for more potent effects. Although Xanax is seldom prescribed for more than two weeks because of tolerance, those who take it for longer will notice it doesn’t affect them the same, leading them to snort the drug for a more potent effect.

Snorting any drug typically involves crushing it up with a razor until it turns into powder. The user will then divide the powder into “lines” and snort it with a straw, paper, or currency that’s rolled up. Ingesting Xanax in this fashion will raise the absorption of the drug. It travels through your bloodstream because of the soft tissue inside your nose. Below are the most common reasons a person will choose to snort the drug, and include the following:

Snorting Xanax forces a quicker reaction because the pills were designed to be released slowly into the bloodstream. By crushing the drug up, Xanax suddenly becomes more dangerous and can lead to long-term misuse, abuse, and addiction. Snorting Xanax can also lead to the following consequences:

A majority of these symptoms occur because of the potency of Xanax when it’s snorted and how it can be too much for someone. A study published a few years ago by Psychopharmacology discovered that the effects of Xanax can be felt in two minutes after being snorted.

How Dangerous is Smoking Xanax? 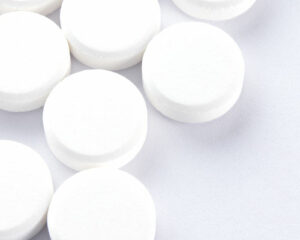 There is very little information about people smoking Xanax, and the effects of it aren’t well-known. Despite that, as mentioned above, using any drug outside of how a doctor prescribes it to you is considered abuse. Even if you take Xanax orally but double your dose or take it more often than instructed, it’s considered abuse. You’ll never be prescribed any drug to be smoked, and Xanax is no different.

When Xanax is crushed into a powder, you’d think that someone is going to snort it. However, it’s also possible to smoke the drug. There have been anecdotal reports of users mixing their Xanax powder with tobacco or marijuana. Others reported putting the powder on top of the foil, similar to how you’d smoke heroin or fentanyl or using an e-cigarette. These methods are all extremely dangerous. As a depressant drug, Xanax is dangerous enough by itself. When you mix it with something else, the results can be catastrophic.

Smoking Xanax can cause severe issues with your lungs. While we’re going through a global pandemic and encountering an airborne illness that affects our lungs, we should do everything we can to preserve the health of our lungs. Smoking chemicals like Xanax can lead to mouth burns, respiratory issues and puts you at risk of developing cancer in the future.

It’s possible to overdose on Xanax when ingesting the drug orally. However, it’s far less likely to occur when you follow the instructions your doctor sets forth. When you’re prescribed Xanax, the doctor takes into consideration your weight, height, and history of drug use when determining a dose. When you abuse the drug, you’re deciding what’s best for you based on the feeling it gives you. That’s dangerous and the quickest path to a fatal overdose. A Xanax overdose will include the following symptoms:

Xanax is designed to be swallowed and broken down by our gastrointestinal system. When you snort or smoke the drug, it sends it directly across the barrier between our brain and blood and right into the bloodstream. The result is a much quicker effect, followed by Xanax building up quickly in the body, leading to a toxic effect and the potential for fatal overdose.

Any overdose, whether it’s alcohol, opioids, or benzodiazepines, is considered a medical emergency and requires immediate help. Overdoses can be fatal. Even when caught in time, an overdose can cause permanent damage. For that reason, if you suspect someone is overdosing on Xanax, you must call 911. The sooner you get help, the better the odds are of survival and not sustaining long-term permanent damage.

If you’ve moved to smoking or snorting Xanax, it’s an indicator that your dependence on the drug has rapidly increased. If you’re unable to achieve the effects of Xanax by using it orally and you’ve opted to abuse the medication, it may be time to consider help. Xanax addiction can be severe, and seeking professional help is in your best interest. If you’re ready to stop using Xanax, you should never do it without help. Withdrawal symptoms can also be fatal without the right care. Fortunately, support is available.