Can You Use Flexeril While Pregnant?

Muscle spasms and back pain are common while pregnant, and Flexeril (cyclobenzaprine) is a muscle relaxant.

Though data is limited, the drug affects brain chemistry. As a result, there could be risks to the fetus if a pregnant woman takes it.

It is unclear exactly how Flexeril works, but it is similar in action to tricyclic antidepressants (TCAs), which interact with the chemical makeup and serotonin levels in the brain. Flexeril is a central nervous system depressant that promotes relaxation and sedation.

According to the prescribing information for Flexeril published by the U.S. Food and Drug Administration (FDA),the medication has been tested on mice, rats, and rabbits with no adverse side effects impacting fertility or fetuses. It has not been tested on pregnant women.

The guide reports that it is unclear whether or not it is safe to use during pregnancy. Even though animal trials indicate it most likely is safe, it is still best to exercise caution and only take Flexeril while pregnant if you absolutely have to.

If you do have to use Flexeril while pregnant, do so only under the direction of a medical professional and in the lowest doses for as short a time as possible.

The FDA classifies medication safety during pregnancy through the following categories, as explained by the American Pregnancy Association: 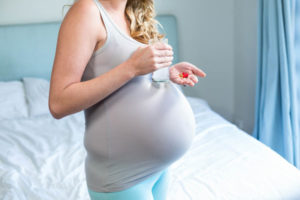 Mayo Clinic publishes that cyclobenzaprine is classified as a Category B. While animal studies have shown no risk to the fetus, there have been no human studies in pregnant women to demonstrate whether or not Flexeril is safe to use during pregnancy.

Flexeril is technically deemed safe during all three trimesters, as there is not enough evidence or controlled studies saying otherwise.

The Journal of Maternal-Fetal and Neonatal Medicine publishes a case wherein a baby was born in respiratory distress and experiencing pulmonary hypertension after the mother took Flexeril during pregnancy. The report indicates that the use of Flexeril in late pregnancy may lead to early ductal closure of the heart in utero.

This likely occurs as a result of the way that Flexeril is thought to inhibit norepinephrine and serotonin reuptake, which in turn inhibits nitric oxide and prostaglandin — the most common cause of this condition.

Use of Flexeril in the third trimester may cause harm to the fetus.

Possible Side Effects of Flexeril

The Prescriber’s Digital Reference (PDR) reports that dosages of Flexeril (cyclobenzaprine) are not to exceed 30 mg per day. Usually, the dosage is given in 5 mg doses three times per day or in 15 mg doses once or twice a day for the extended-release formulation.

Flexeril is only recommended to be taken for a short period of time — no more than two to three weeks. It is taken as a tablet to be swallowed by mouth.

As with any medication, it is not without risk factors. The most common side effects of Flexeril are dizziness, drowsiness, and dry mouth.

Other Possible Side Effects of Flexeril Include the Following:

When pregnant, some of these side effects may be more intense or significant. The possibility of these should be assessed before taking a medication like Flexeril.

Flexeril should not be mixed with alcohol due to the amplified central nervous system depressant effects. Pregnant women should not drink alcohol regardless.

Flexeril may make it harder to think clearly, remember things, and make sound decisions. In this way, Flexeril should be used with caution, especially during pregnancy, as it is a mind-altering drug.

Flexeril may have unpredictable side effects. It is not quite understood how the drug works or what harm it may cause to an unborn baby.

Flexeril use should be closely monitored in pregnant women and caution should be exercised before deciding to take the medication.

It is commonly considered an adjunct medication, which means it is to be used in tandem with other methods to treat muscle pain and spasms, such as physical therapy and rest. Alternative and holistic measures are optimal during pregnancy.

Small doses of Flexeril for a short time may be more beneficial than harmful in some cases. A medical professional can help you decide what is right for your situation.