Is Xanax Really Addictive? (What the Science Shows)

Xanax is a Schedule IV drug, which is defined by the U.S. Drug Enforcement Administration (DEA) as a substance with a low potential for abuse and dependence. Even with this classification, Xanax can be habit-forming and is abused by many people.

Xanax is the trade name for alprazolam, which is used to treat anxiety and panic disorders. It is a benzodiazepine medication and available as a dissolvable tablet as well as an extended-release tablet. The medication works by calming the brain and slowing heart rate to provide relief from symptoms of anxiety or panic attacks.

Despite the DEA classification, many public health and addiction professionals believe that Xanax is highly addictive and widely abused.

Xanax has some pharmacological properties that contribute to its misuse potential. It also works in similar ways as other benzodiazepines in the brain by creating a pleasurable feeling that reinforces use of the drug.

Xanax is implicated in more emergency room visits related to drug misuse than other benzos, including diazepam, lorazepam, and clonazepam.

Researchers point to Xanax’s quick absorption and short half-life of eight to 16 hours. This means that it acts in a way that provides a more potent effect, but its effects fade quickly compared to other benzos, increasing the reward potential. This also means that the drug is associated with more severe withdrawal symptoms after a shorter period of use, so people can become addicted more quickly to the drug.

Substances that provide a quick and potent effect but last only a short time can be more addictive because they trigger a quick reward to the brain. The reward doesn’t last, so the brain begins to send signals for more of the pleasurable substances, which leads to drug cravings.

These chemical reactions in the brain cause feelings of relaxation, and they reduce anxiety and panic as designed. In larger doses, or when not prescribed for a legitimate problem, this can create a euphoric effect that leads some people to abuse the medication. 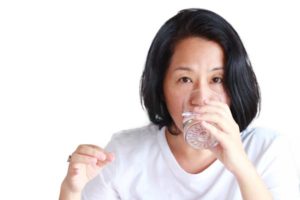 When Xanax is taken via a method other than as intended, its effects are heightened.

The drug is meant to be taken orally. Some people crush the tablets and snort, smoke, or inject the powder to experience quicker effects. This increases the rate of absorption in the body, which contributes to the risk of addiction developing.

A study published in the journal Psychopharmacology found that when alprazolam is inhaled, participants experienced the effects of the drug much more rapidly and measured higher on scores related to abuse potential.

Benzodiazepines like Xanax have usually been prescribed drugs for sedative purposes, and addiction rates are low. This is what the data tells us about benzodiazepine addictions:

Xanax, as a CNS depressant, is in the top three categories of commonly misused prescription medications, which are opioids, central nervous system (CNS) depressants, and stimulants, according to the National Institute on Drug Abuse (NIDA).

The term misuse refers to any use of a drug other than how it is prescribed, including taking the drug at higher doses or more frequently than prescribed. It can also mean taking a drug you do not have a prescription for or ingesting a drug in a manner other than as intended, such as snorting or smoking it.

Addiction refers to the compulsive drug-seeking behaviors that accompany dependency after a person has grown accustomed to the presence of the drug in their system and experiences withdrawal symptoms when the drug is out of the system. Misusing Xanax increases the risk that dependency or addiction will develop.

The Substance Abuse and Mental Health Services Administration issued a Drug Abuse Warning Network (DAWN) report stating that benzodiazepines are most dangerous when combined with other drugs or alcohol. During the reporting period from 2005 to 2011, there were 943,032 emergency room visits involving benzodiazepines.

When benzos were combined with opioids or alcohol, there was a 24 to 55 percent increase in the risk of a more severe outcome, including hospitalization or death, than when benzos were taken alone.

How Does Xanax Compare With Other Drugs?

While Xanax is one of the most commonly prescribed drugs in the United States, it has a low abuse rate compared with some other drugs of abuse.

According to NIDA, marijuana is the most commonly used drug, with data suggesting that there are about 22.2 million current users and about 30 percent of marijuana users who have a marijuana use disorder.

Opioid addictions are another major concern for public health officials. Opioid overdoses are currently causing more than 130 deaths a day in the U.S. This involves prescription pain relievers as well as illicit opioid substances like heroin and synthetic opioids such as fentanyl. Opioids can be highly addictive and can easily cause overdose when not taken as prescribed or when obtained in illicit markets.

Other substances that the DEA considers to be more addictive than Xanax include:

Drugs That Are Considered Less Addictive Than Xanax Include:

Recreational Use and Polysubstance Abuse

Despite the low rates of abuse overall among benzodiazepine users, Xanax remains a concern due to its unique pharmacological properties. Xanax should only be taken as prescribed and should not be combined with other drugs except under the direction of a doctor.

Xanax has some value as a street drug to be used recreationally. This demonstrates that even though the drug is considered a lower-risk drug in terms of abuse potential, there is still a market for the drug, so people are abusing it.

When Xanax is combined with other CNS depressants, such as alcohol, it increases the potential for overdose.  When CNS depressants are combined, the effect of all substances is amplified. Most benzodiazepine overdoses involve another substance as well.

The risk of abusing Xanax, especially in combination with other CNS depressants, is that the respiratory rate will slow to a dangerous level, and a person could stop breathing. If any signs of respiratory distress occur after taking Xanax, seek immediate medical attention.