What are the Different Kinds of Heroin? (How are They Different?)

Opioid drugs have been around since the beginning of civilization, and there is proof that the drugs were used as pain relievers as early as 3400 B.C. in Mesopotamia. The Sumerians often nicknamed the opium poppy the “Hul Gil,” which translates to the joy plant.

Around 460 to 357 B.C., Hippocrates, the father of medicine, began to recognize the medical value that opium provided as a narcotic. He would prescribe drinking the juice of the white poppy mixed with the seed of nettle.

Opium derivatives, including morphine, eventually grew to be widely used pain relievers. When heroin was first synthesized, it was also used for medical use until physicians deemed the drug too addictive.

All opiate drugs are derivatives of opium. Opium comes from the milky sap of a flower known as the opium poppy. Opium cultivation was practiced among the ancient Greeks, Persians, and Egyptians, and opium use in ancient Egypt spread like wildfire under the reign of King Tutankhamen around 1333 to 1324 B.C. Also, the Greek author Homer referred to opium’s healing powers in the famous epic poem of the Odyssey.

During these ancient times, opium was used to induce sleep, relieve pain, and to calm children. That may sound extreme knowing what we now know about the drug, but these were times when not much was known about the drug except its therapeutic benefits.

If you fast forward hundreds of years, the popular drug known as heroin was discovered, and the development of heroin abuse was introduced. Heroin, in pharmacological studies, is proven to be more effective than morphine or codeine. The Bayer company started the production of heroin in 1891 on a commercial scale, and the first clinical results were so promising that heroin was deemed a wonder drug at the time.

Heroin was much more effective than codeine in respiratory diseases, but the studies showed that repeat administration of the drug created a tolerance, which led to heroin addicts. Heroin became a narcotic drug, and its abuse began to spread rapidly throughout the country. International treaties regulated restrictions on its production, use, and distribution.

Today, we are experiencing an opioid crisis that one could have never imagined in the 1890s when heroin was first synthesized. Once the studies proved their effects, it was widely believed they could contain heroin use by implementing stricter laws, but they were wrong.

Heroin abuse has become one of the most popular and challenging topics of our time. Heroin use skyrocketed when more stringent restrictions were implemented on prescription opioids, and it has caused a significant influx in overdose deaths. Now that we’ve examined the history of heroin a bit, let’s take a look at what heroin is and how it affects the human body.

Heroin is an opioid drug made from morphine, a natural substance taken from the seed pod of the various opium poppy plants. These plants are grown in Southeast and Southwest Asia, Mexico, and Colombia. Heroin enters the brain rapidly and binds to opioid receptors that induce feelings of sleepiness, euphoria, and relaxation. Heroin is classified as a central nervous system (CNS) depressant. Those who use the drug can experience a whole host of side effects.

Short-Term Effects of Heroin Use

The immediate effects of heroin have been described as an instant rush like they have put on a warm blanket. There is a sudden rush of pleasure and euphoria and ease with the world. Other side effects include:

Long-Term Effects of Heroin Use

Those who use heroin for an extended period will develop long-term effects such as addiction. Other effects include:

One issue that can cause increased problems with heroin use is that it can be cut with additives such as sugar, cornstarch, or powdered milk, which can clog blood vessels causing permanent damage. Another problem with heroin is the emergence of the synthetic opioid known as fentanyl.

Fentanyl has become so prevalent in heroin that the drug is seldom ever pure heroin anymore. The rise of fentanyl has increased overdose deaths associated with heroin. While the drug is often cut, there are still versions of the substance that are often pure heroin. Let’s take a look at the different kinds of heroin and why they are different.

What Are the Different Kinds of Heroin?

White heroin is the purest form of the drug and can be sometimes found on the illicit market in a white powder that typically has a high level of acidity. Contrary to popular belief, white heroin doesn’t have the highest purity level, and it is not uncommon for heroin to be cut with an addictive substance that changes the color. The drug is often referred to as “China White.”

Brown heroin, one of the three forms of heroin found in the United States, is often smoked but it can also be injected. It is a granular, powdered form of heroin with poor water solubility. It is commonly brought into the U.S. from Mexico and found in markets west of the Mississippi River. Brown heroin is known as a base, which means it can be smoked, but it has to be mixed with an acid, heated, and dissolved in water before one can inject it. 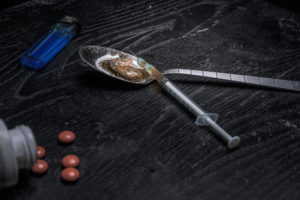 Black tar heroin is common in California and regions near the Mexican border. The substance is sticky like roofing tar or coal. The color is a result of the manufacturing process that leaves impurities in the final product. The purity levels seldom top 25 to 30 percent, so it is known as a less pure version than other types of heroin. Black tar users typically inject the substance, but use of this substance can cause adverse side effects that can end in overdose or death.

Injecting black tar heroin can cause vein collapse and gangrene among other problems. Gangrene is when the area of injection dies and causes the area to be amputated. Those who do not seek immediate medical attention can die from the bacterial disease if they do not have the limb removed.

If you or someone you know is using heroin, it is imperative that they seek out help immediately. Heroin use is dangerous on its own, but the increase in fentanyl cases has made the drug even more dangerous. The only way to ensure your safety is to stop using heroin.

Get Help For Heroin Addiction Today

If you are struggling with heroin addiction to heroin, call the treatment specialists at Serenity at Summit 855-956-4940 or contact us online to learn more about your addiction treatment options. Our fully licensed staff puts our clients first to ensure a positive outlook and that they receive the treatment they need. Heroin addiction may be a complex disease, but it’s one that’s treatable with help. We can provide you with that help. Reach out to us today.