Suboxone vs Methadone: Which Is Better for Medication-Assisted Treatment?

If you’ve ever been prescribed opioid medication to treat acute pain after an injury or surgery or experimented with drugs at one point in your life, you know the grip they can have on you. Many people who use opioids for the first time refer to it as feeling like a warm blanket that changed their lives. Some consider opioids the missing link in their lives, but the relief they experience is merely short-lived. The longer you take opioids, you’re at risk of developing an opioid use disorder (OUD), often referred to as opioid abuse, opioid dependence, or opioid addiction. The U.S. Centers for Disease Control and Prevention (CDC) considers it a “problematic pattern of opioid use that leads to significant impairment or distress.”

According to UC San Diego Health, 25 percent of patients prescribed opioids for chronic pain misuse them, and five to ten percent will develop an opioid use disorder. While narcotic pain relievers serve their purpose in our society, they’re fraught with issues and often lead to more significant matters than they were designed to treat. Even though 75 percent of prescription opioid users won’t abuse them, the 25 percent that does is still a staggering figure based on the volume of prescriptions written. Even worse, the influx of fentanyl in our communities has made opioid addiction even more challenging to manage.

Opioid addiction reached epidemic levels in the past several years in the United States and globally and continues to remain there. One analysis estimates that 3 million people in the United States are addicted to opioids. That figure is even greater at 16 million globally. More than 500,000 of those cases in the U.S. are dependent on heroin. Opioid use has run rampant for some time now, but fentanyl has been like jet fuel on an open blaze, leading to hundreds of thousands of deaths in the past several years. The stakes have never been higher for getting help, and many rely on medication-assisted treatment (MAT) to manage their disorder.

Addiction treatment is the most valuable tool our society has to fight this crisis. While some can get through and maintain their sobriety, others will need some extra help in the form of MAT. The American Psychological Association (APA) defines addiction as a chronic disorder with psychological, biological, environmental, and social factors that influence its development. It estimates that 50 percent of the risk is genetic. For many years, we believed addiction was a matter of willpower. However, now we know it’s a disease and have found successful means of managing it.

Suboxone and methadone are opioid drugs used to manage addiction. However, which drug is better for medication-assisted treatment? Below, we’ll examine the two in-depth and determine the better option for you.

It may seem counterintuitive to use an opioid to treat opioid addiction. However, that’s the case – opioids like Suboxone are extremely 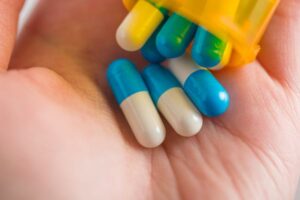 effective in managing addiction, but how? Suboxone is a medication consisting of buprenorphine and naloxone, and the U.S. Food and Drug Administration (FDA) approves its use in treating opioid addiction. What makes this drug so unique is that it binds to the same opioid receptors as heroin, fentanyl, or oxycodone. If you consume those drugs while on Suboxone, it’ll block their effects. By attaching to the same receptors, Suboxone blocks opioid cravings, which many describe as the most challenging barrier to remaining sober in the long term.

Suboxone is two compounds consisting of a 4:1 buprenorphine to naloxone. Buprenorphine, the primary active element, is a partial agonist and long-acting opioid. Naloxone is the portion that counteracts the effects of the opioid and prevents the risk of it being misused. Both medications work in harmony to decrease opioid withdrawal and prevent cravings. However, as an opioid that works on the same receptors, tolerance, dependence, and even addiction still apply.

Methadone is the more common of the two because it’s been around longer. Suboxone has been treating opioid use disorder since 2002, while methadone has been used since 1947. Methadone is a synthetic analgesic opioid with similar characteristics to morphine but is longer-acting and used to treat opioid addiction. Like Suboxone, its objective is to help people quit their illicit or prescription narcotic medication intake. It does this by binding to the opioid receptors and changing how the brain and nervous system respond to pain. It reduces opioid withdrawal and blocks the euphoric effects produced by oxycodone, heroin, or fentanyl.

Unlike Suboxone, which comes as an oral film that’s placed under your tongue or between the cheek, methadone is offered in pill, liquid, and wafer forms. The drug lasts four to eight hours, and people typically have to visit a clinic once a day to receive their dose, whereas Suboxone can be obtained from a pharmacy for a week’s worth of the medication.

While these are both used for medication-assisted treatment, one might work better than the other. Below, we’ll examine those differences in more detail.

Are Methadone and Suboxone the Same?

No. Although both are in the same class of drugs, compare them like this: fentanyl and Vicodin are both opioids but used for different purposes. Despite sharing many similarities and treating the same condition, Suboxone combines two medications, buprenorphine, and naloxone, while methadone is a synthetic opioid that helps with cravings and withdrawals. Methadone and Suboxone can be taken in the long term to manage symptoms and assist you on your journey toward sobriety. It allows addicts to function in everyday life without the constant overwhelming thought of cravings.

Suboxone and Methadone: What Are the Differences?

Despite both drugs helping you with opioid use disorder, their delivery is much different. Methadone is a full-agonist opioid medication. It binds to the same opioid receptors as heroin, fentanyl, or oxycodone. However, instead of producing a high, it calms your cravings, similar to how oxycodone would, but without causing you to become intoxicated. Since methadone is used orally, it does not produce a rush of euphoria.

On the other hand, Suboxone is a partial agonist opioid, meaning the binding to the same opioid receptors is much weaker. While it curbs cravings like methadone, it has milder opioid effects. Methadone has the potential to produce euphoric effects, while Suboxone does not.

As a full-agonist opioid, methadone is heavily regulated. If you’re prescribed methadone, you can only obtain it by reporting to a clinic to get your daily dose. However, if you’ve proven the ability to remain sober, doctors will allow you to take home enough doses to last a few days. With Suboxone, you can fill a prescription at a pharmacy and get a month’s worth at a time.

Suboxone is often the first choice by addiction specialists for opioid addiction because it’s less likely to be abused. The naloxone blocker prevents an overdose from occurring if it is misused. Although it seems like the ideal choice, methadone has been successfully implemented for several decades. It’s another great choice, and some will switch to it if Suboxone hasn’t worked the way they anticipated.

Methadone and Suboxone should never be used together. Remember, these are both opioids. Despite the naloxone in Suboxone, using it in conjunction with another depressant increases the risk of potentially fatal overdose. If you’ve considered medication-assisted treatment – which drug works best?

Suboxone vs. Methadone: Which Is More Effective?

When you were actively using, getting sober seemed like an insurmountable task. When you finish treatment, it’s common to look back and be astonished by what you were able to overcome. However, the confines of treatment are a safe space. Once you leave, maintaining your sobriety poses the same challenges as getting there. So, if you’re considering medication-assisted treatment, which drug is more effective? Suboxone or methadone?

Suboxone and methadone are similar, and neither drug is considered more potent than the other. If you have a high tolerance to opioids, you won’t get high when taking Suboxone. It’ll immediately relieve your withdrawal symptoms. Since methadone is a synthetic full-agonist opioid, your brain is affected similarly to heroin or oxycodone. The objective of methadone is to satisfy cravings and present withdrawal symptoms with safe doses approved by a doctor. Since there isn’t a one-size-fits-all solution, it’s impossible to say this drug will work better than the other.

We all have unique brain chemistry, meaning that Suboxone might work better than methadone for you while methadone works better for someone else than Suboxone. Both drugs are equally effective at treating opioid addiction. The only way to find out what works best for you is through trial and error. Your doctor will prescribe the drug best suited for you and see how you react. If it works, that’s good. If not, they can seek another treatment option.