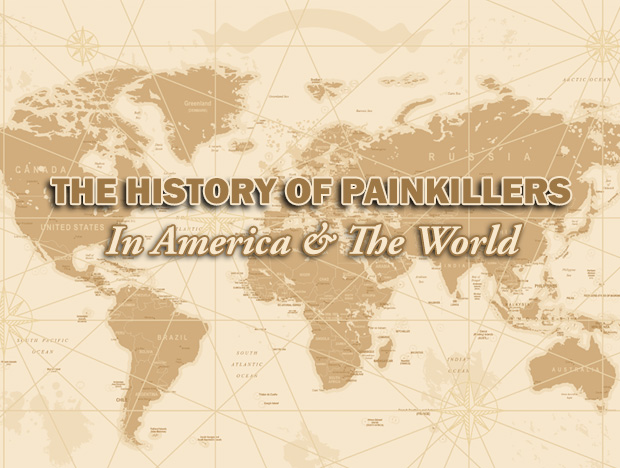 Chronic pain affects about 50 million Americans every day. From headaches to arthritis, humans experience a range of different pains. These may also come from a traumatic accident, such as a car crash or slip and fall. Pain can be debilitating, preventing people from going to work and doing their daily activities. Luckily, people can find relief with painkillers.

Opiates as painkillers have been around for thousands of years, originally derived from poppies. Back in the Stone Age, the typical belief was that pain came from spirits or the gods. Pain remedies included animal sacrifices and religious offerings. In Ancient Egypt, people used electric eels on wounds – a practice somewhat similar to the electrical nerve stimulation we use today for some aches and pains. The Ancient Greeks followed the wisdom of Hippocrates and used willow leaves and bark for pain management (a natural source of salicylic acid and the main ingredient in aspirin).

In the Middle Ages, the use of herbs for pain management became popularized. During the 16th century, chemists used opium prepared in alcohol, creating a tincture known as laudanum. By the 1800s, however, physicians were using morphine in its pure form. This is where drug dependency really became an issue. In 1803, morphine was discovered and named after Morpheus, the Greek God of Dreams. It was administered orally until hypodermic needles were invented in 1853. In the late 1870s, people discovered that if you boil morphine, you get something several times more potent: heroin.

America, in particular, has had a long history of creating, distributing, and using painkillers. Since the late 19th century, opioid abuse has reached problematic levels multiple times, inciting the need for policymakers to step in. In the 1980s, drug companies rigorously promoted opioids as a safe way to treat chronic pain. Doctors reported that painkiller addiction was rare, with ratios such as only four in 12,000 patients becoming addicted. Physicians even asserted that doctors who withheld opioid prescriptions were under-treating pain.

In 2000, the Drug Addiction Treatment Act emphasized opioid substitution therapy as a treatment for addiction. Qualified physicians could prescribe outpatient opioid-based medications such as buprenorphine for use at home. In about 2003, studies voicing concerns about opioid addiction began to surface; a government survey found that more than 20% of people ages 18-25 in America abused prescription pain medication. Physicians prescribed narcotic painkillers in large amounts, leading to some being arrested after patients started selling drugs on the illegal market.

The Cause Of The Painkiller Epidemic

Investigations soon revealed that physicians’ overzealous prescription methods were mostly the result of drug companies making false claims about the safety of opioids. In 2007, the manufacturing company for OxyContin paid a $600 million settlement when it pled guilty to such fraud charges. Similar settlements followed suit as further investigations exposed this widespread problem.

Today, opioids cause more deaths than any other drug. In 2010, patients consumed 99% of the world’s total amount of hydrocodone (the opiate in Vicodin) and 80% of the world’s oxycodone (in OxyContin and Percocet). These amounts are still climbing despite the attempts of policymakers to spread awareness of the issue and make changes. In 2011, President Obama released a plan to respond to America’s prescription drug abuse crisis, emphasizing the importance of educating parents, youth, and healthcare providers.

Is There A Solution On The Horizon?

Federal and state policymakers are constantly coming up with new solutions and approaches to curb the ongoing prescription pain medication problem. Solutions include finding and shutting down illegal online opioid markets, educating physicians on the proper amounts of painkillers to prescribe, and encouraging parents to teach children the dangers of drug addiction from an early age. Promoting the safe and responsible use of opioids to treat pain will save billions of dollars in healthcare costs and thousands of lives otherwise taken by addictions and overdoses.

Reducing painkiller misuse and abuse in America and around the world requires unified efforts by federal, state, and local entities. Health care professionals, parents and community citizens need to learn how to optimize awareness and prevention efforts using available data and resources. The opioid epidemic will only come to an end with widespread education and awareness of the issue.

If you or a loved one is suffering from opioid addiction, help is available. Call us today!