The Legalization of Marijuana and the Impact on Recovery

In the 2020 election, voters chose to legalize the recreational use of marijuana in Arizona, Montana, South Dakota, and New Jersey. In fact, marijuana use was approved in every state it was on the ballot in November. New Jersey’s decision to legalize recreational use is thought to open the door for surrounding states like Pennsylvania and New York to follow suit. They join more than a dozen states that have fully legalized the drug. Mississippi voted to legalize medical marijuana use, joining over half the country.

But what does legalization mean for the people in recovery? Will people be more vulnerable to substance use disorders that involve marijuana? Learn more about the recent legalization of marijuana and how it could affect recovery.

What Do the New Amendments Mean?

In the states where voters chose to allow the recreational use of marijuana, it means marijuana will be legal to use without a prescription for non-medical purposes. That doesn’t mean it won’t be without regulation. Marijuana will only be legal for people that are 21-years-old or older. However, the specifics of the legalization needs to be ironed out by state legislatures. How will marijuana be taxed, regulated, and distributed? With voters making their decisions, the states have until the end of the year to answer those questions.

In New Jersey, a bill was passed in December that legalized marijuana and solidified some points in the distribution process. They decided that only a certain amount of marijuana cultivation licenses would be given out in the first two years of the new law. It will still be illegal to sell or grow marijuana without a license.

Like other states, New Jersey decided to use tax revenue to help people affected by drugs or the War on Drugs. The state will allocate 70% of tax revenue to help people that were disproportionately affected by the War on Drugs. In Oregon, all drugs were decriminalized 2020, which means being in possession of an amount of a substance that’s consistent with personal use is no longer a criminal offense and instead more like a speeding ticket.

States that legalized the medical use of the drug elected to allow people with a verified medical need to buy and use marijuana. Marijuana has shown to be effective for a few medical needs, most notably chronic pain symptoms and nausea caused by chemotherapy. However, in states with legalized medical marijuana, doctors may recommend the drug for a variety of ailments, from autoimmune diseases to anxiety. In states where marijuana is allowed for medical but not personal use, it’s necessary to have a license, card, or prescription to obtain the drug.

How Does Legalization Affect People?

Any new legislation has the potential to affect many people. One clear area of contention is people that are currently in prison for marijuana possession. Some argue that people that broke the law to possess marijuana should continue to carry out their sentences, even though the drug has since been legalized. Others argue that the new law should be retroactive; otherwise, people are in prison for something that is no longer a crime. For instance, in New Jersey, the governor is receiving pressure to pardon people in prison for marijuana-related crimes.

One of the often-cited advantages of marijuana legalization and decriminalization is that it will significantly decrease the number of incarcerated Americans. Even if people with marijuana possession convictions are not pardoned, legalization should decrease the prison population over time. The majority of drug arrests in the United States involved marijuana.

But what about people in recovery? Will their exposure to marijuana increase? People in recovery from substance use disorders learn ways to cope with triggers that cause compulsions to relapse. However, new and unexpected temptations are always a challenge. It’s also possible that someone in recovery associates marijuana with the use of other drugs as well.

When it comes to exposure, the availability of marijuana may increase, but only slightly. Where marijuana is illegal, it’s the illicit drug that’s easiest to find and purchase. Even underaged teens have very little trouble finding marijuana in states where it’s illegal. In fact, legal marijuana may diminish the illegal market for the drug, forcing users to get the drug through legal dispensers. Legalization also cuts down on marijuana-related gang violence and criminal activity.

However, exposure to marijuana may increase as marijuana marketing becomes more visible. In states with legal recreational marijuana, dispensaries pop up in strip malls, and advertisements can be seen on billboards. Like alcohol, legal marijuana may eventually become more mainstream, making advertising as common as beer commercials. 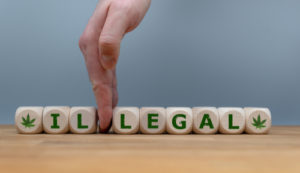 There are several benefits to legalizing marijuana aside from the socioeconomic arguments. Illicit drugs are inherently dangerous. Illegal marijuana may be mixed with synthetic cannabis, which can be dangerous. The potency of the drug may also be unpredictable. Legal marijuana is standardized and regulated, making it easier to know what you take and how much you’re taking.

What About Rising THC Levels?

THC is the active chemical in marijuana that causes its psychoactive effects. It’s one of the two main cannabinoids in marijuana, with the other being CBD. CBD doesn’t cause powerful psychoactive effects and even counteracts some of the effects of THC. Marijuana, in its natural state, has balanced THC and CBD levels. As marijuana use continued, illicit drug dealers found ways to produce strains of marijuana that were higher in THC and lower in CBD.

Very high THC levels can be dangerous. THC can cause psychosis in high doses, and people that are predisposed to problems like schizophrenia.

The more potent the product is, the more lucrative small amounts of marijuana will be. Valuable, potent marijuana can also be transported in smaller packages that are harder to detect. The drive to create more potent drugs is common among illicit drugs. Even alcohol went through a similar process during the prohibition when hard liquor like gin became more popular than beer. Legal weed vendors may have the same incentives because of shipping costs and other factors. But regulations may be able to keep standardized CBD and THC levels.