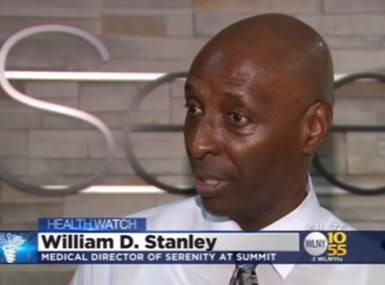 We’re excited to share that Serenity at Summit’s very own Medical Director, Dr. William Stanley was featured on WCBS News with a viewership of 2 million in June 2015 in a segment titled, “Alcohol Abuse” discussing the recent study revealing that 1/3 Americans suffer from an alcohol disorder.

Dr. Stanley Outlines the Full Spectrum of Alcohol Use Disorder

Dr. Stanley outlines the “spectrum” of alcohol dependency and use for viewers, stating that experts no longer want to make alcoholism a one-stop diagnosis, as there are varying levels of dependence and abuse.

View the segment below:

The WCBS segment was also featured on WLNY-TV New York, NY with a viewership of 90,000 during the 9am hour in their “Health Watch” section. WLNY TV 10/55 is part of the CBS Television Stations group, a division of CBS Corp. and one of the largest network-owned station groups in the country.

View the segment below:

Get the latest news, press and media relating to Summit Behavioral Health and all of our treatment facilities and programs!