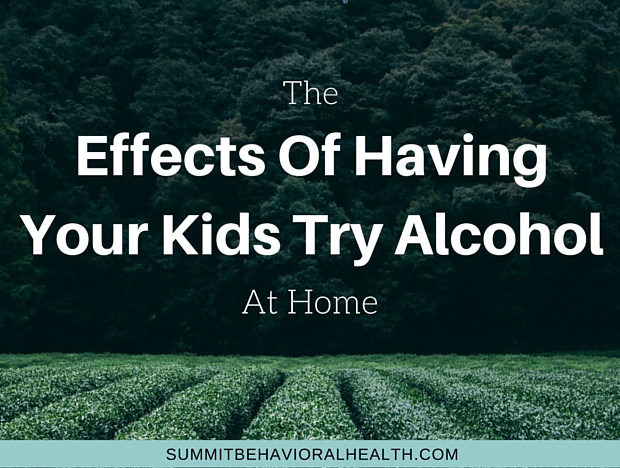 Being a parent involves making an endless amount of judgment calls, from the time your child is born until they grow up and are ready to leave the nest. One of the many decisions that parents have to make has to do with alcohol. Some parents insist on total abstinence while others prefer to allow their children to experiment with alcohol at home, when they are underage.

The Pull of Your Personal Beliefs

Much of the debate is jumbled with how adults themselves consume alcohol. Some believe any level of drinking is detrimental. Others only consume alcohol to celebrate with friends and family. Still others drink alcohol on a daily basis with meals. Unfortunately, there is a segment of parents who are alcoholics.

Because of this, there are parents who take a firm stance on alcohol consumption with their kids and simply don’t condone underage drinking in any capacity. Others believe that letting kids try alcohol at home gives them an introduction to drinking in a safe and controlled environment.

While every family has its own set of circumstances and concerns when it comes to alcohol, there are certainly some considerations that all parents need to weigh before allowing their underage children to drink at home for the first time.

Kids allowed to drink at home were four times more likely to have binged on alcohol by high school.

In a study conducted by the Center for Alcohol and Addiction Studies, researchers followed American students for three years and discovered that those who had been able to sip alcohol at a young age were five times more likely than their peers to have a full drink by the time they were in high school. They were also four times more likely to have binged on alcohol by this time, too. Interestingly, the study also showed that nearly 30 percent of students had sipped alcohol. In most of these cases, the alcohol was provided from their parents at a party.

Yes, In Europe They Drink At an Early Age, but Is It Even Comparable?

Some parents who do give alcohol to underage children present the “European model” of introducing kids to alcohol early so that it’s not considered to be an off-limit or taboo substance. Yet, it’s important to remember that there are substantial cultural differences between the United States and Europe. High school and college binge drinking is less common in countries like France where wine consumption is often considered a natural part of meals. Alcoholism rates throughout Europe are also comparable to those in the United States, proving that early drinking may not be the best option there either.

Researchers have long known that the age at which an individual starts drinking is a good predictor of whether or not he or she will later develop an addiction. For example, a child who starts drinking between the ages of 11 and 14 has a 16 percent chance of becoming an alcoholic. The percentage drops to just 1 percent for those who start at the age of 19 or older, according to results of an Ontario Canada Health Survey.

Researchers believe that the higher percentage of early drinkers becoming future alcoholics may be partially linked to how alcohol impacts brain development. Children who are able to drink at an earlier age may also have unstable family environments or have a family history of alcoholism which puts them at an even greater risk of developing an addiction.

Remember, if you allow your kids to try a beer or glass of wine every now and then or on “special” occasions, you may be sending mixed signals which could be detrimental to their young minds and futures. Without even realizing it, you may be paving the path to a future addiction.

For those children, or parents for that matter, who find themselves struggling with alcohol addiction, the best decision is getting early treatment. Alcoholism is a progressive disease that doesn’t resolve itself on its own. Are you concerned that you or your child may be drinking too much? Speak to an addiction specialist now and get answers to your questions.