Is Diphenhydramine Effective (& Safe) for Anxiety?

Using diphenhydramine for anxiety is likely not a good idea. While some research indicates it may be helpful in that regard, it is not currently an on-label use for the medication.

You should not take it for anxiety without first consulting a doctor.

What Is Diphenhydramine (DPH)?

Diphenhydramine (DPH) is an antihistamine, usually used to treat the symptoms of allergies and colds. DPH can also treat temporary sleep problems, although it should not serve this purpose for too long, as the quality of that medicated sleep can be relatively poor.

DPH, which is often sold under the brand names Benadryl and Aleve PM, is sold as an over-the-counter medication.

What Can DPH Do For Anxiety?

Some people use diphenhydramine to treat anxiety. The evidence of the efficacy of DPH for this is relatively murky, and it is not an on-label use of the medication. There are both risks associated with using this medication for anxiety and research potentially supporting this use.

There has been enough promising evidence that DPH (specifically Benadryl) may be helpful in treating some cases of anxiety that it warrants further research. For example, trials with mice and rats have shown Benadryl can have an anxiolytic (anti-anxiety) effect.

It appears that most of this anxiolytic effect comes from DPH’s effect on the central H1 (histamine) receptors. This happens through what is called an inverse agonism. Histamine is blocked, and an opposite effect also occurs (the inverse agonism). 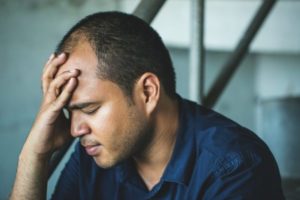 This process accounts for DPH’s primary, but not sole, link to anxiolytic properties. The way in which DPH interacts with M1 receptors, norepinephrine transporters (NETs), alpha-1 receptors, serotonin transporters (SERT), and more in the brain can help.

Additionally, if sleep problems are causing anxiety, DPH’s positive effect on those problems may reduce anxiety.

Much of the above is in the early stages of research, proven only with mice and rats. Human studies are limited. Not nearly enough trials have been performed to claim that DPH should be used to treat anxiety definitively.

Further trials may take place, but it is not a priority for companies that produce the drug. Any company can make diphenhydramine, and trials are expensive. If one company proved its efficacy and increased demand for the drug, any company (not just the one that performed the expensive research) could produce more to meet the demand.

Diphenhydramine is only likely to help a subset of those with anxiety problems. It has even been shown to cause more anxiety in some people.

While diphenhydramine is generally safe, long-term use carries risks of serious symptoms. These include the following:

If you experience any of these symptoms, stop taking DPH and contact a doctor immediately, even if you were not using the drug for long. Never conceal your use of the drug from a doctor.

Additionally, familiarize yourself with DPH’s interactions with other drugs.

Diphenhydramine can also have troublesome but less immediately dangerous side effects, including the following:

Depending on your condition, therapy may be able to lead you to far fewer problems with anxiety. You may get to a place mentally where you no longer feel the need to take anxiety medications at all.

If you have more serious anxiety problems, it also is likely whatever effect DPH might have is not enough. You should not simply take more DPH if you feel the recommended 25 mg dose is not enough for you. Instead, you should speak with a psychiatrist about your options and any medications that might potentially help you.

Like many off-label uses for medications, there appears to be a grain of truth to the claim that diphenhydramine can help with anxiety. However, it comes with enough risks that you should not use it without a doctor’s knowledge and approval for this purpose.

Currently, the research evidence supporting DPH’s use to treat anxiety is lacking.

DPH is not an especially dangerous medication if used as intended. The issue with most off-label use is there is no good research to justify when such use becomes too risky. Much of medicine is about balancing the benefits of a medication with its risks. There is not enough information to come to that conclusion when using DPH as an anxiolytic.